Today is Monday, 11th October, and this is Cointribune’s Crypto analytics. You will learn about everything that’s been going on in the market, as well as what to expect next in our new article! If you’d like to read the previous instalment, please follow the link. Off we go! 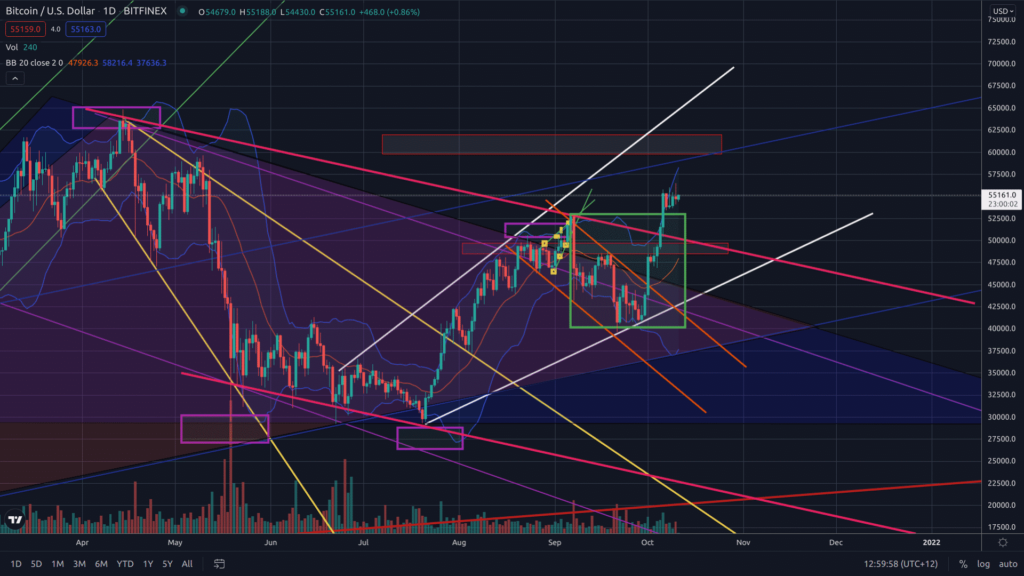 On Sunday, Bitcoin made yet another attempt to gain a foothold above the $56,000 level and even reached $56,500 for a brief moment. However, under the bears’ pressure, the bulls had to tone it down and retreat a little. As of this writing, BTC is trading at around $55,300.

Bitcoin has come close to the resistance at the top of the blue trading channel. At this stage, we see consolidation, with the lows of every next candle getting higher than the previous ones. This proves the bulls’ great potential and may even suggest an early breakout.

Ethereum isn’t as confident as many would like it to be. The largest altcoin lacks the strength to break out, which is why we may be in for a natural collapse in the end. As of this writing, ETH is trading at around $3,460.

However, Bitcoin still remains Ethereum’s main beacon. Even though the altcoin no longer blindly follows it, Ethereum still depends on BTC.

The fear and greed index is in the greed zone. At the same time, BTC is consolidating in one area and getting ready for a new breakout. It’s still not viable for the whales to provoke a collapse, thus leaving the other players room for action.

The top ten altcoins are almost all in the red. However, this seems to be short-term and very soon, alternative cryptocurrencies are likely to return to the green zone again.

I would particularly like to highlight Cardano (ADA), which bypassed Binance Coin (BNB) and took back its third place in the Top-10 Altcoins rating.

Stacks (STX) becomes today’s gainer. This asset has already brought its holders about 30% of profits.

Tezos (XTZ) becomes the loser of the day. This asset has brought a 10% loss to its holders.

Bitcoin continues its ascent. Closing the weekly candle above the $54,600 level is a notable achievement pointing to the possibility of further growth. The fear and greed index also indicates that now is the safest time to trade. Don’t forget about stop losses and don’t neglect risk management.