Today is Thursday, 16th September, and this is Cointribune’s Crypto analytics. You will learn about everything that’s been going in the market, and also what to expect next in our new article! If you’d like to read the previous instalment, please follow the link. Here we go! 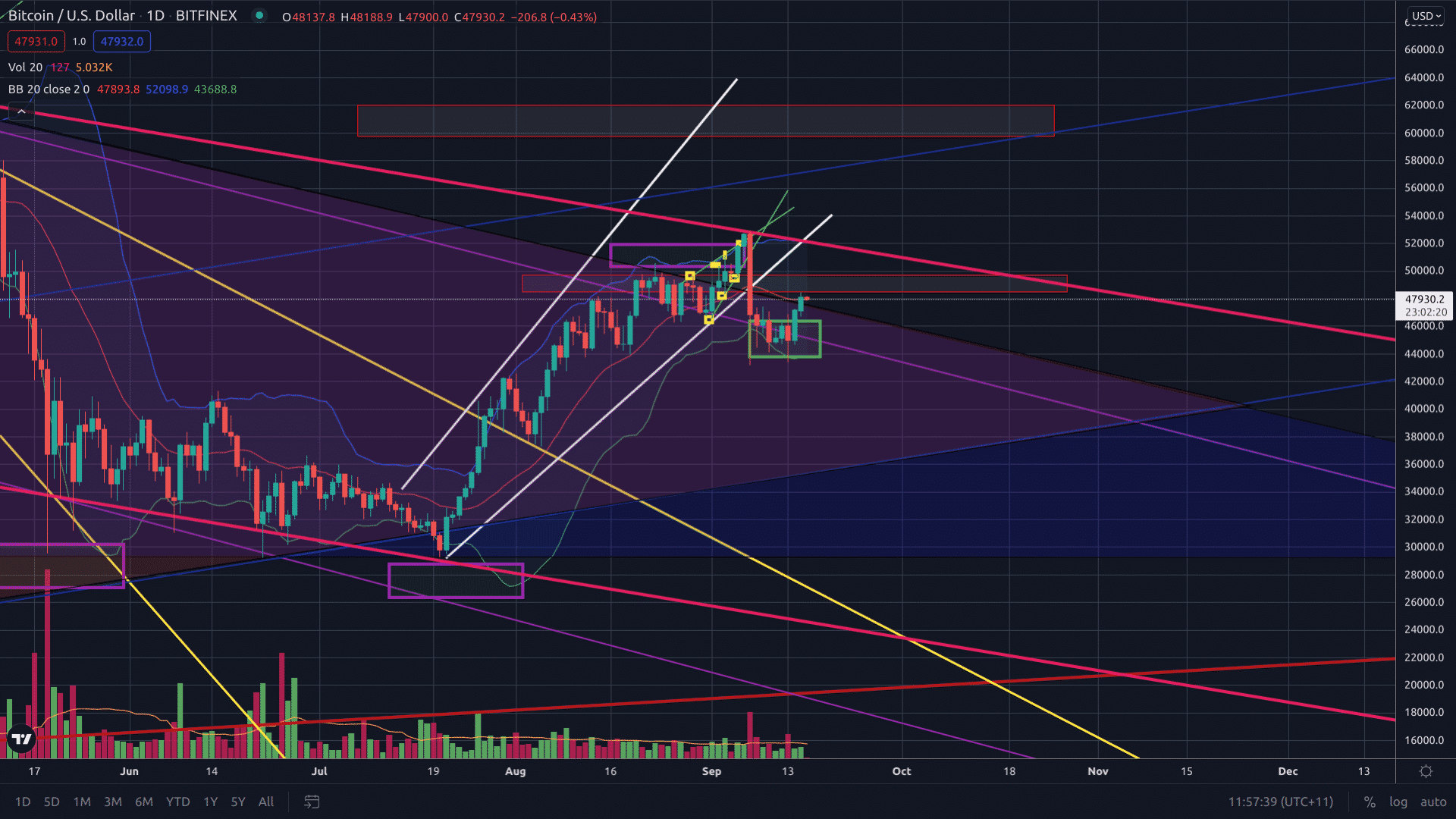 Bitcoin’s recovery continues. Having finished the last day at an advantage, today (although starting with a slight drop), it’s already making every effort to recoup losses and set a new local high.

As of this writing, BTC is trading at around $48,100 and it doesn’t look like it’s going to stop there.

Keep in mind that we have come close to resistance and until BTC gains a foothold above $52,000 – we are in for 4000 points of fierce bearish pressure, which, however, doesn’t mean BTC is doomed.

The last movement helped us get out of the purple trading range, but we can still feel the influence of the pink descending range, which came about after Bitcoin’s last fall to $43,000, its upper limit currently acting as a dynamic resistance.

There’s still a lot of work to do, but the positive sentiment is starting to take over the market. This is primarily due to the golden cross pattern being noticed on the BTC chart and hyped up on Twitter.

The MAs can cross at any time, and the main idea is that this intersection signals trend change.

As a rule, there are three stages to the golden cross:

– The short-term MA staying below the long-term MA during the downtrend period;

-The trend going in the opposite direction, the short-term MA crossing up through the long-term MA.

– An uptrend starting from the point where the short-term MA goes over the long-term MA.

The short-term (50-day) MA going over the long-term (200-day) MA indicates a potential shift in the market trend, that’s why the golden cross is believed to indicate the potential for a major bullish rally.

Anyway, this idea seems to have gone viral, restoring a little faith in the market. It’s quite likely that its influence may even be enough to break the current resistance with minimal losses and conquer the last ATH.

Mind that these patterns aren’t just some random lines drawn on the chart. They are a system that visualises the decisions made by the majority of players in the market, a way to understand where the asset is going by evaluating the choices made. Simply put, trading channels, patterns, intersections – everything on the chart is a part of the system shaped by the traders’ behaviour. The trading range (channel), for example, marks the zones where most players prefer to buy (support) and sell (resistance) their assets. The overall trend of this very range (upward, downward, or straight) indicates the prevailing local/global trend in the market.

The market is cyclical – that’s what the pattern theory is based on. Traders themselves look for various figures on the chart and, based on this information, decide how to enter or exit an asset. Thus, by following the same signs, the majority of traders vote for certain movements (opening deals) using the funds available, they support this very cyclicity, which in turn defines the events they expect to take place.

The price changes not because traders draw lines, but because they vote for such a change with their wallets. And as you know, an asset goes where the majority of trading volumes lead it. If buyers are at an advantage, the asset grows; if sellers have an upper hand, it falls.

Some of you may wonder why trading on the crypto market is so difficult then? After all, if everyone adheres to the same system, shouldn’t everyone gain money?

Well, first things first, traders aren’t always unanimous in their decisions. And the whole point of any trade is that you invest your funds to multiply them at someone else’s expense. Money doesn’t just magically appear out of nowhere, there will always be losers in this game.

Moreover, we shouldn’t forget about individuals whose volumes may exceed those of all other traders. Such people are called whales. While ordinary players are forced to study the trend and build their trading strategy around it, whales set the very direction of the trend, often causing unexpected changes in prices and huge losses for retail investors.

Globally, the picture has remained the same for BTC. We’re trying to break through the resistance and were Bitcoin to fall below it, there will be several key levels making it possible to rebound. The first one is at around $45,000. The second one is $40,000, an important psychological level. The third level is the zone near $35,000, which acts as a support dictated by the wedge bottom. The fourth point will be around $30,000, the upper limit of the descending trading range (yellow). Finally, the last level of $20,000 acts as the bottom of the descending purple trading range. Going below the last key level may signify the imminent coming of crypto-winter.

Right now, however, it’s too early to talk about the price going lower. Bitcoin continues to move within the bullish wedge pattern, typically exited via a strong pump.

I can’t say that buying BTC for $47,000 -$48,000 is an offer you can’t refuse. At the same time, this is one of the lowest prices you can get it for. It’s quite likely that soon the price will be significantly higher, so make hay while the sun shines.

The second-largest crypto by capitalisation carries on rising. Bitcoin’s positive trend has also affected Ethereum, trading at around $3585 as of this writing.

If you take a look at the chart, you’ll see that ETH finished yesterday with a good green candle. Although today began with a rollback, yesterday’s similar reversal didn’t prevent Ethereum from closing the candle with good growth.

ETH is making an attempt to move into the ascending blue trading range. If it succeeds, it’s highly likely that by the end of this week, Ethereum will return to its pre-seventh September dump price.

The fear and greed index continues to shift in favour of greed. People are becoming more and more active, with the dump of 7th September scaring them less and less. There is nothing to worry about now, but as soon as the indicator reaches “extreme greed”, we may be in for another dump, if one of the whales suddenly decides to fix a profit.

On the other hand, what’s the point of stopping people willing to buy? Most likely, the situation will develop as follows. If the bulls’ activity increases, it will enable Bitcoin to climb higher. It’s possible that the bulls will even allow BTC to set a new ATH. However, if buyer activity is low and people doubt BTC’s potential growth, it’s bound to provoke sales.

In general, if you are interested in BTC, it is better to buy now, before it is too late. Many players will start longing only after making sure the asset is in high demand. However, it’s usually too late to enter at that point.

The Top-10 altcoins according to CoinMarketCap continue to turn green, with the exception of Solana (SOL) losing ground after a sixteen-hour network outage. Polkadot (DOT) has mirrored Solana’s trend.

Despite the fall, I think that you shouldn’t ignore these tokens. There’s a chance that very soon they will rebound and attract everyone’s attention, so it’s a good idea to buy them now.

Horizen (ZEN) is the gainer of the day. Over the past 24 hours, this asset has brought its users more than 25% gains. And judging by the chart, it’s not the limit.

Elrond (EGLD) becomes the loser of the day according to CoinMarketCap’s Top 100 altcoins. The coin has already lost more than 8% in price, although, judging by the chart, this movement is just a natural correction. EGLD hasn’t yet reached its limit, so buying it isn’t a bad idea.

Bitcoin is making attempts to recover, with Ethereum and altcoins following it. However, until BTC gains a foothold over the $50,000 level, the rest of the market will be in limbo. Don’t forget about risk management and stop losses!