The closed-door meeting of North American miners has caused a lot of controversy over the past week. Interviewed at Coindesk’s Consensus conference, Michael Saylor worked to dispel some legitimate concerns raised by Bitcoiners. 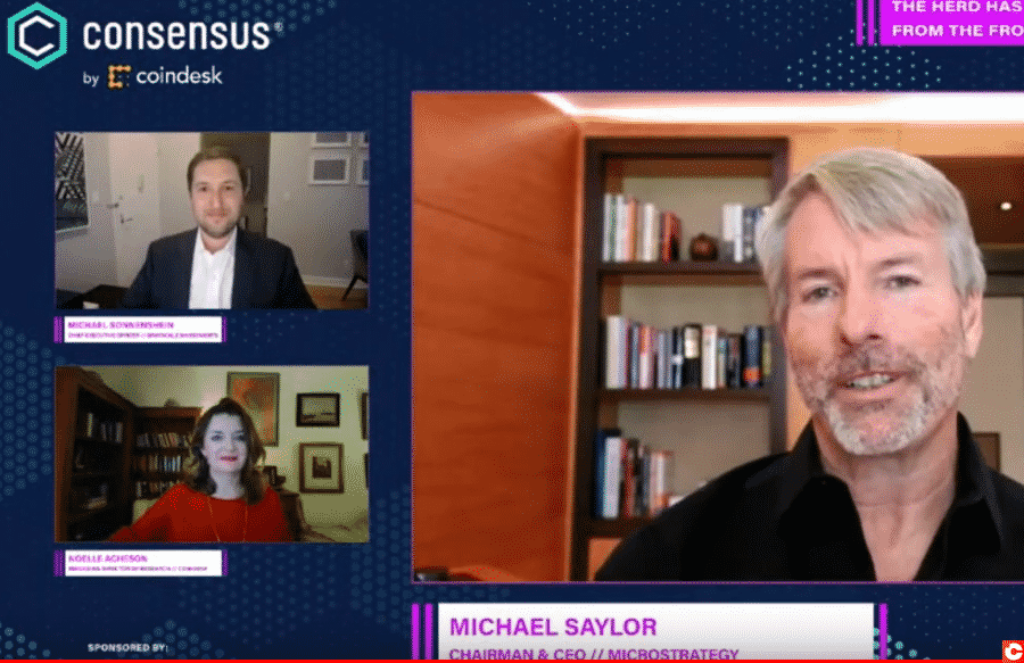 On the Bitcoin price crash

Before tackling this ‘mining council’, Michael Saylor weighed in on the recent bitcoin crash:

Admitting that Bitcoin may seem like it is crashing all the time if you only have a passing interest; he explained that the deeper you look at it, you more you see it is a generational or decade-long trade.

He also explained that institutions drove the 2021 price rise:

“They were enthusiastic about it and decided to buy it when we were at around $30,000 at the beginning of the year. They watched the value of bitcoin double in a single quarter and thought to themselves, ‘well, it can’t double every quarter, it’s ahead of itself.’ And then they stopped and they wouldn’t buy. You need a dip where they can get in at a very good price.”

Saylor then made an interesting observation of Binance’s trading volumes. On Bitcoin’s darkest day, Black Thursday of March 2020, when the price bottomed out at $5,000, Binance traded $2 billion of Bitcoin. When Microstrategy announced its purchase of Bitcoin on 10th August, it had traded $1 billion. Last week, it traded $14 or $15 billion on some days last week and traded $60 billion over the course of six days. This means that last week, institutions hoovered up some $60 billion of Bitcoin from people who were panicking. Unbelievable figures.

On how the ‘mining council’ came about

The moderator Noelle Acheson touched on the famous “mining council” that made headlines this week. Michael Saylor gave some context, explaining that Elon Musk is a strong believer in crypto and Bitcoin as a long-term store of value. However, he did have some criticisms:

“Bitcoin is great but it’s not that easy to explain it to the general public. I think 280-character Tweets are not the best way to educate the public and build consensus. So, I reached out to Elon and we had a very long conversation. I asked him if he had met with Bitcoin miners. […] Bitcoin miners do not have a good forum for communicating how they generate their energy. We don’t have a shared model, nor forecasts. This means journalists can create their own models, the most famous being the ‘boil the oceans by 2020’ model, that is going to cause the planet to heat by two degrees and kill us all…”

For context, S19 mining rigs are five times more efficient than S9 miners. Between the halvings, shift to transaction fees and miner upgrades, Saylor thinks that energy efficiency will increase exponentially and that energy consumption will decrease. As it turns out, Elon wanted to know what US-based miners’ plans were for the future: he wanted to know how Bitcoiners could become the good guys on the environmental issue.

On the ‘mining council’ controversy

Acheson then echoed the fears of Bitcoiners, imagining (rightly) that this meeting could turn into a kind of secret agreement with sinister intentions.

Saylor tried to address these worries, explaining that all of the meeting’s participants, including Elon, are strong supporters of decentralisation. The only reason they had this meeting was to ensure the success of a decentralised cryptocurrency.

“Some expressed concern that it was a secret meeting: if it was a secret meeting, I wouldn’t have told millions of people the next day, trust me! We told everybody in the world that we had a meeting, and if you want to know what happened, I’ll tell you. Elon met the miners. The miners talked about their approach toward energy and their commitment to sustainability. We asked Elon for his advice about how we might manage concerns in the mainstream. We had a detailed conversation about it. It was very constructive.”

Michael gave the same speech to CNN in a seven-minute summary of his own views:

This interview shows that Michael Saylor went to the attack to defuse the mining controversy. He gave Elon Musk a chance to get back on track. Only time will tell if the billionaire will continue to feel any shred of remorse while pumping Dogecoin…