Ever since early 2021, we’re seeing a viral meme take the crypto world by storm. An increasing number of bloggers and renowned crypto activists worldwide are posting their photos with laser eyes in them. But why? 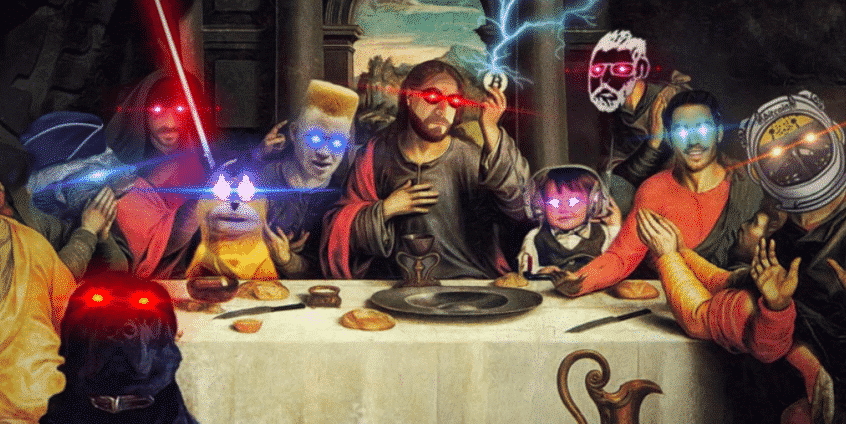 The origins of the meme can be traced back to the famous Twitter blogger Chainforce, who calls himself ‘Meme Factory Cofounder’. He was the one who came up with the idea of giving your eyes a laser glint. And as it happens, there is a solid message behind the act – by doing so, you express your outspoken support of crypto and Bitcoin in particular. On his Twitter, you can see loads of pics of different people with their eyes replaced with laser ones.

She then explained to The Hill that she is an avid Bitcoin supporter and wanted everyone to know it. Also, she told Bitcoin Magazine that she’d bought her first Bitcoin in 2013 when one BTC was worth about $300. One heck of an investment, we’ll give her that. However there hasn’t yet been an official confirmation of her words.

After Lummis set a precedent, many prominent figures followed suit:

Changpeng Zhao, whose tweet hints at the inevitability of crypto dominance

and Michael Saylor among others.

But where is it headed?

There are several versions of why so many Bitcoin activists and supporters around the globe are giving up their ‘natural’ eyes in favour of laser ones.

The first being the hashtag #LaserEyesUntil100k that is often seen among those posts.

Perhaps these people are trying to say that they can see so much further than others they can already see the point where that price is real.

Another theory is that the flashmob is meant to draw a parallel between laser beams and cryptocurrencies. The implication being, crypto is a technology as sophisticated and far-reaching as lasers are perceived to be. The people posting laser eyes are making a statement, drawing a line between them and the rest of the world, and sending out a message that they belong to a new, more advanced species. There certainly must be a reason why the meme caught on even with Elon Musk – creator of the world’s most technologically advanced automobiles to date.

The lasers could also represent an unrelenting force capable of obliterating anything in its way; a force that can’t be rivalled.

The truth, most likely, is somewhere in-between. It may as well just be one of those viral memes that are easy to get in on but hard to explain.

Whatever the case, it’s clear that the meme is deemed to make an impact: cryptocurrencies are, beyond doubt, a force to be reckoned with, more so now than ever before. And there is definitely truth in saying that it will stop at nothing, much like a laser beam will not be deterred by an obstacle.

Seeing how the value of BTC skyrocketed over the past few years, from $300 to $45,000, it’s not outside the realm of possibility that at some point, we will see it hit the $100,000 mark. The $2 trillion (~£1.4 trillion) capitalisation of crypto and the unceasing growth of DeFi can only facilitate that.

We’ll see you then… if you know what I mean…