Today is Tuesday, 12th October, and this is Cointribune’s Crypto analytics. You will learn about everything that’s been going on in the market, as well as what to expect next in our new article! If you’d like to read the previous instalment, please follow the link. Off we go! 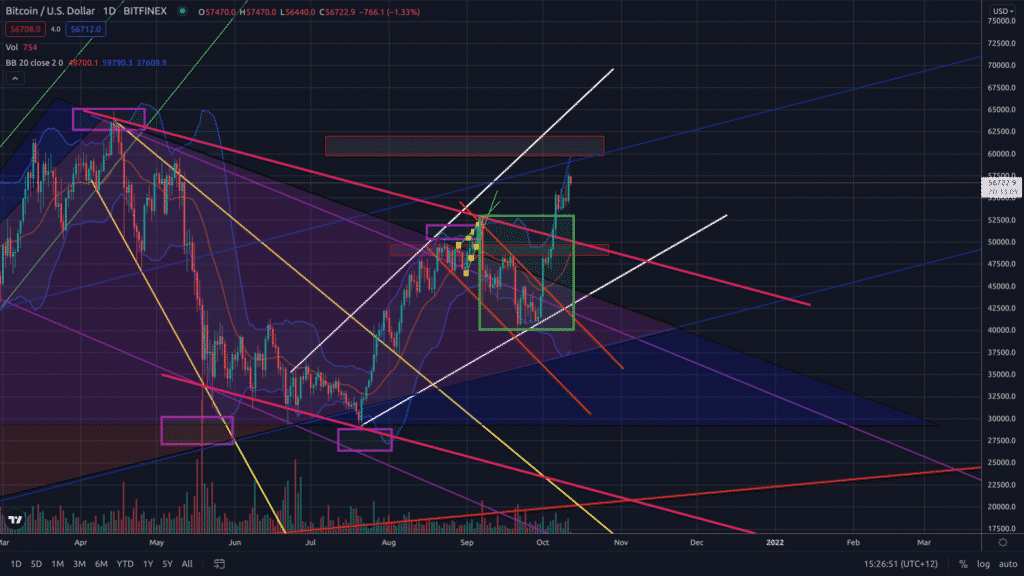 The first cryptocurrency continues its ascent to a new all-time high. Yesterday Bitcoin briefly held above $57,000, but the bears were not happy with the situation and soon pushed the bulls back to the $56,000 level. At the time of writing, BTC is trading near $56,800.

The largest cryptocurrency spent the weekend gathering its strength and preparing to challenge resistance dictated by the top boundary of the blue trading channel. As early as Monday, BTC made its first attempts to capture the new mark. At this rate, by the end of this week, the first cryptocurrency could reach $60,000 or even surpass the last all-time high. It may not be easy to do, but a move above $65,000 would mark the start of a new bullish rally for the first cryptocurrency and would likely trigger a massive spike.

The second cryptocurrency, unlike the first, is not behaving as optimistically as some would like. Even though Ethereum‘s issuance is being reduced through fee burning, which in theory should help support the price even as new coins are constantly being mined, the largest altcoin is bearish and preparing for a return to the $3,000–$3,200 range.

Naturally, ETH’s momentum could change at any moment, especially if BTC suddenly starts a dramatic leap and begins a full-scale ascent to the latest all-time high. But at the current stage, the second most capitalised cryptocurrency is extremely passive. It seems that the bulls are not in the mood to advance at all.

The cryptocurrency market has finally started growing again. Many analysts predicted it would go into another round of global correction, referred to by many as cryptocurrency winter. However, this latest pullback was in fact just a respite, needed to build up strength before the next surge. BTC’s bullish wedge has finally begun to form outside of the triangle we have been examining for weeks.