Today is Wednesday, 17th November, and this is Cointribune’s Crypto analytics. You will learn about everything that’s been going on in the market, as well as what to expect next in our new article! Make sure to have a look at the previous instalment. Off we go! 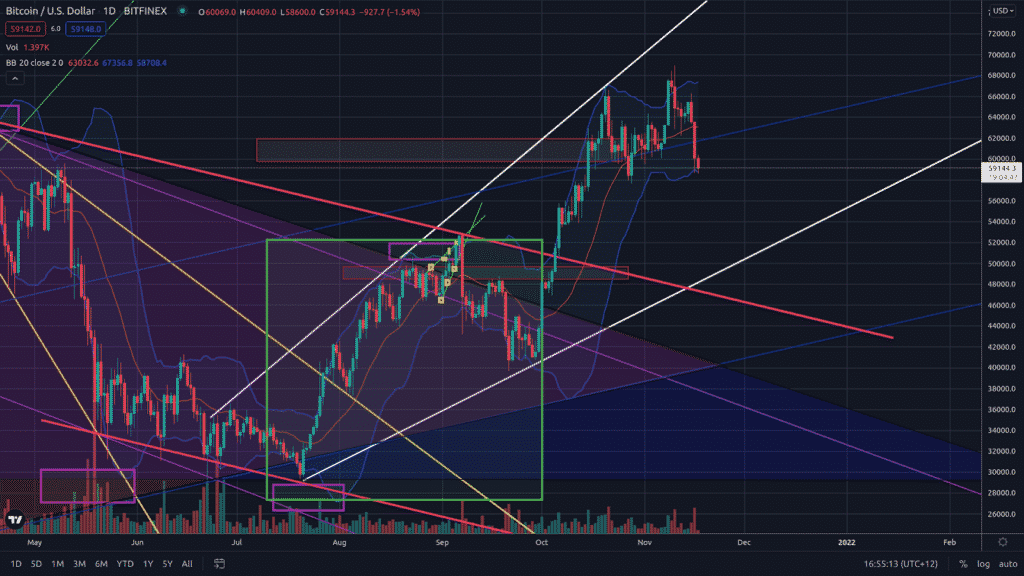 The trend has changed. Yesterday Bitcoin was still trying to recover, but after falling below $59,000, the bulls finally lost their advantage. As a result, the next day started with the bears trying to push the price even lower. Thus, at the time of writing, the BTC is trading around $59,400.

The price of the first cryptocurrency has fallen below a significant low and continues to decline. If the buyers don’t pull themselves together and consolidate above $60,000, then we can clearly state that the retest of the upper boundary of the white broadening channel has failed and the price is inevitably aimed at the support formed by the lower boundary of the same channel.

The downside targets will be the ranges of $53,000–$55,000 and $48,000–$50,000. At this rate, we have less and less chance of reaching $100,000 by the end of this year. It’s also worth noting that the bulls’ activity is rather weak at the moment. Almost no one is buying the downtrend, which in turn may cause the start of another headlong plunge. The situation will worsen considerably if the whales join the selling. In that case, we could consider this Bitcoin growth cycle over and get ready for another two-year wait.

Ethereum has also given way to weakness. The biggest altcoin, which until now has expressed only complete indifference to the movements of the rest of the market, lost around $500 in just 24 hours. At the time of writing, ETH is trading around $4,150.

As I said before, it makes no sense to look at Ethereum in isolation from Bitcoin right now. The biggest alternative cryptocurrency appears to be in for a massive sell-off, which could see it return all the way down to $3,500.

It’s only the third day since the start of the week, but it’s already the most loss-making period of the last six weeks. Take care of your funds and do everything possible to secure your investment. It’s better to lose a little when a stop loss triggers than to have no money at all, foolishly believing that a miracle will happen.