Today is Monday, 18th October, and this is Cointribune’s Crypto analytics. You will learn about everything that’s been going on in the market, as well as what to expect next in our new article! If you’d like to read the previous instalment, please follow the link. Off we go! 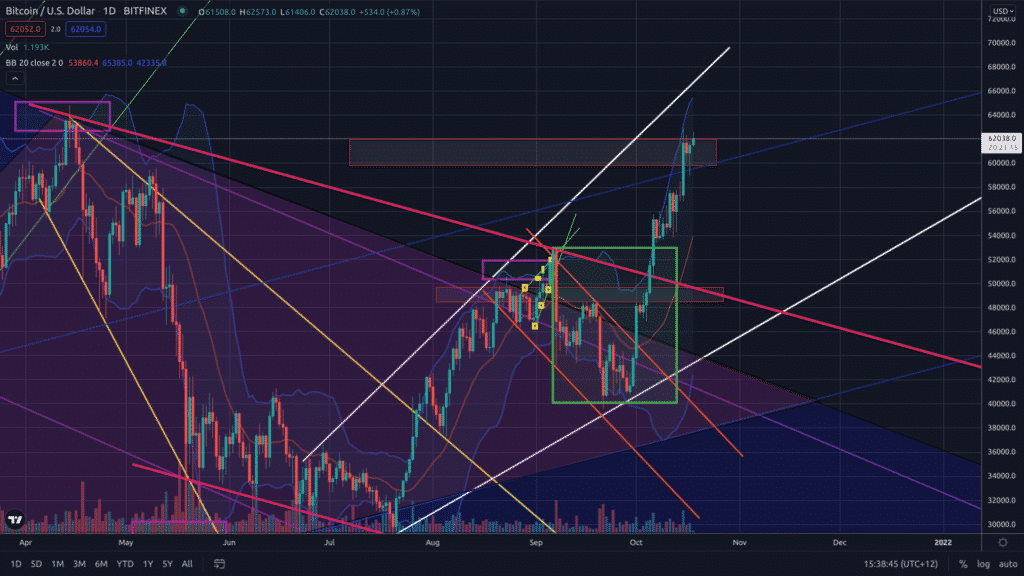 BTC has almost reached the top of the expanding trading channel (the white line). The breakout, so far, is questionable, though. Just like with any other digital asset, every unsuccessful retest of a new price level brings the correction closer, pushing BTC a bit further down towards support.

On the other hand, yesterday Bitcoin made a rollback to the $59,000 area, but the price almost returned to its current level during the day. This, in turn, signals increasing buyer activity and indicates that the bulls are too strong for the correction to take place.

Trading on the first SEC-approved, futures-based Bitcoin ETF is due to begin this week. In the past, the information about the ETF launch contributed greatly to the growth of BTC’s price, however, with the start of trading, the situation changed drastically. It’s actually believed that the last crypto winter began with the launch of BTC futures on CME in 2017. So, history may well repeat itself.

Ethereum is still making attempts to climb above $4,000, however, Bitcoin’s whims hold the largest altcoin back every single time. As of this writing, ETH is trading at around $3,850.

Ethereum is neither rising nor falling. The asset froze in the consolidation zone, which may be exited via a sharp move caused by BTC, possibly resulting in Ethereum’s new ATH. However, in case of BTC’s sudden collapse, ETH will also be in for a strong correction.

The market feels very optimistic. However, that’s when the collapse is most likely. I don’t think that the correction will happen right now, although I can’t help but draw your attention to the fact that BTC’s price has been greatly inflated by the ETF rumours. In the end, this can lead to a situation when the news has already exhausted itself and there’s simply nothing to sustain further growth. In this case, many may begin fixing profits, possibly provoking an avalanche-like collapse in the future.