Today is Saturday, 20th November, and this is Cointribune’s Crypto analytics. You will learn about what’s been going on in the market, as well as what to expect next in our new article! Make sure to have a look at the previous instalment. Off we go! 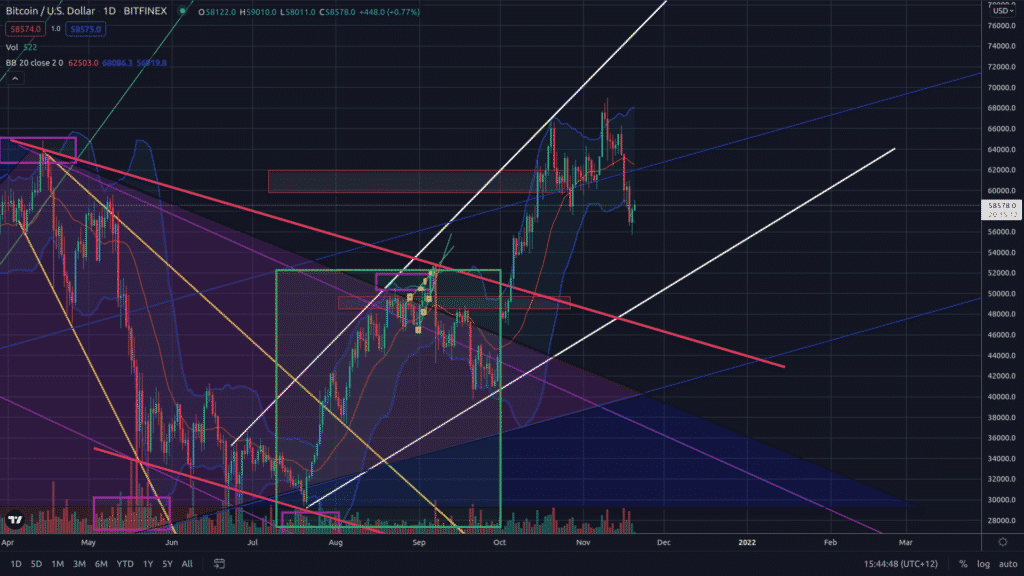 So far today, Bitcoin has attempted to recover. Over the past ~24 hours, the first cryptocurrency has put on about $3,000 in price. However, now BTC is hitting psychological resistance in the $58,000 – $60,000 range, which it still lacks the strength to overcome. If the level test fails again, we will see a pullback to $55,000.

However, do not forget that anything can happen during the weekend, including the impossible. It is unlikely that players who bought BTC higher and are now at a loss will start selling off spot their assets spot. So for bears, as usual, the main source of strength will be the liquidation of margin positions. But at this point, quite a few of those have already been eliminated. Based on all that, it’s safe to take a more cautious stance, because this time, they may attempt to start flushing leveraged shorts.

One way or another, right now, we are witnessing a struggle for the level. Buyers are clearly not strong enough yet, but until the current daily candle turns red, it’s too early to deem them failed.

Ethereum once again followed in the footsteps of Bitcoin and made a significant leap forward. However, since the beginning of the new day, the largest altcoin is sending off signs of weakness, which may indicate an impending fall of ETH back to $4000. At the time of this writing, the second-largest cryptocurrency is trading at around $4200.

PlanB’s $98,000 BTC bet is unlikely at this point. This indicates that the Stock-2-Flow model, contrary to the expectations of many, can only indicate the probable maximum of the first cryptocurrency, relevant only at the time of verification. This model doesn’t consider the interests of the players and the possibility of market manipulation through the news. In other words, S2F works only under laboratory conditions, since it is unrealistic to account for all aspects of price changes in the market. S2F is sorely ineffective for long-term forecasting of the BTC price.

As to why you’ll see it with your own eyes in the next ten days or so. Hope is good, but when it turns into hopium… well, you know how it goes. Don’t forget about stop-losses, and don’t neglect risk management.