Today is Wednesday, 24th November, and this is Cointribune’s Crypto analytics. You will learn about what’s been going on in the market, as well as what to expect next in our new article! Make sure to have a look at the previous instalment. Off we go! 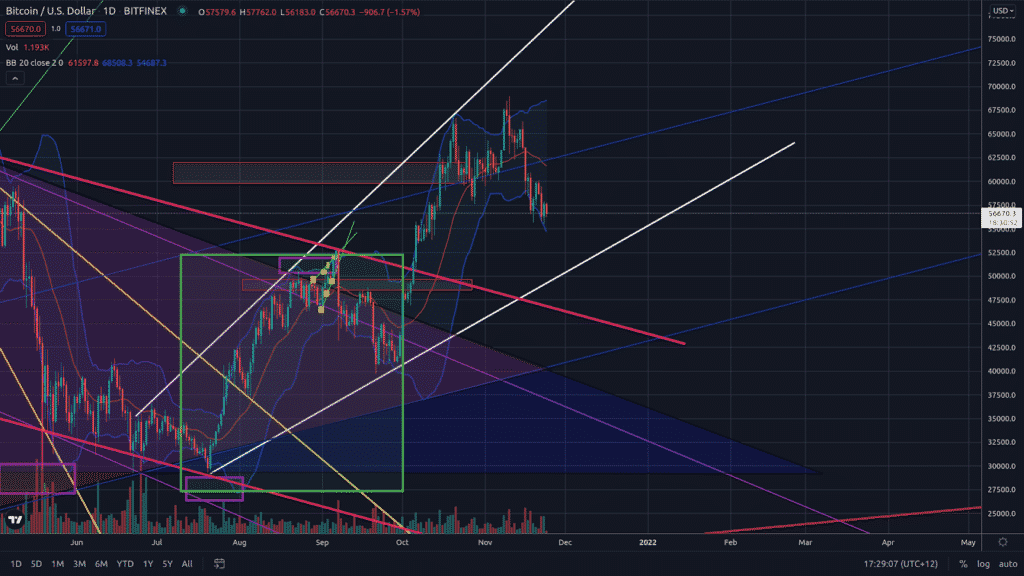 Yesterday ended with the first cryptocurrency struggling to break out of the local downtrend. However, as the bulls failed to reach a new high, the bears took the initiative from the beginning of the new day, and Bitcoin started to decline again.

There’s still a chance that BTC will switch to another tactic and go flat between $55,000 and $58,000. The growth scenario and a new retest of the psychological resistance at $60,000 can only be considered if today’s candle, just like yesterday’s, closes the day in the green zone above the level of $58,000. Until then, I believe the most realistic scenario is for the market dump to continue. If that happens, we will see a retest of support at $50,000.

The $50,000 mark is a psychological support, reinforced by the lower boundary of the white broadening channel. It’s highly probable that this level will hold and then the local trend will change again. The price will head upwards.

In the past 24 hours, Ethereum managed to get close to psychological resistance at $4,000. However, the market sentiment later changed, and the second largest cryptocurrency managed to overcome its weakness and rose as high as $4,500.

However, a new day means new rules. Bitcoin has settled in such a way that in just a few hours from the start of the new candle, the biggest alternative digital asset has already lost half of the way it covered yesterday.

It’s highly likely that Bitcoin will close the day with a dump. Spot players are advised to sit it out in stablecoins, keeping buy limit orders at $58,000 just in case. For leveraged traders, I would advise only to have no regrets when their long positions become the next portion of fuel for the first cryptocurrency’s collapse.