Today is Saturday, 27th November, and this is Cointribune’s Crypto analytics. You will learn about what’s been going on in the market, as well as what to expect next in our new article! Make sure to have a look at the previous instalment. Off we go! 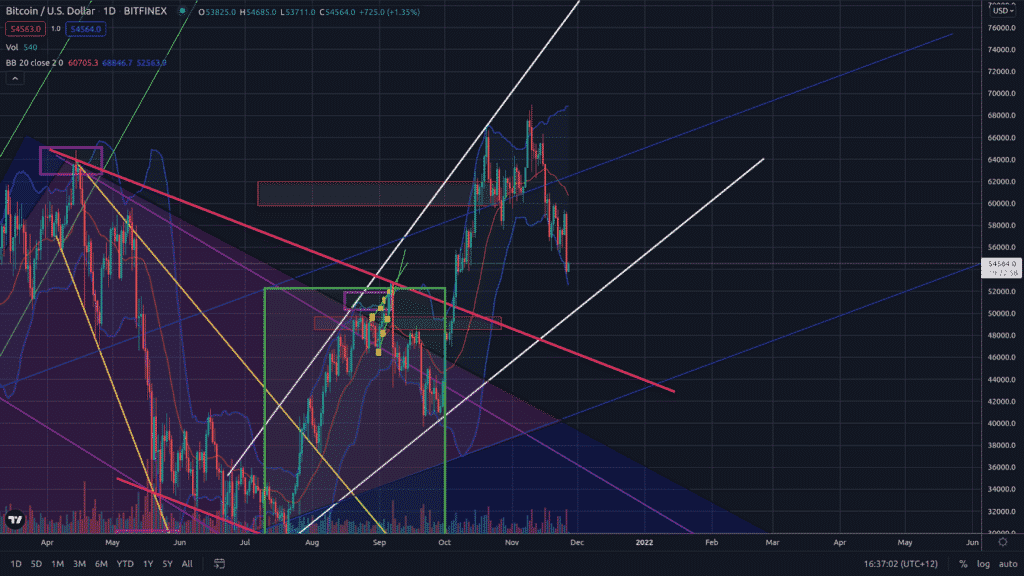 Yesterday ended with Bitcoin making a strong move towards support near the lower boundary of the broadening trading channel. The biggest digital asset by market capitalisation broke below local resistance at $55,000 and at some point reached close to $53,500. At the current stage, the bulls have picked themselves up a bit and reached the $54,000–$55,000 range.

So, what do we have now? A broken local support and a new local low, which is hard to ignore. Even though Bitcoin is diligently climbing upwards right now, there’s a high probability that it won’t even make it to $55,000 or won’t consolidate in the range above that value. Thus, the bulls, without much strength to continue the confrontation, got the resistance formed right in front of their noses, which will now push the price even lower.

In the short term, there may be a small recovery, which will act as a rebound after a strong move. In the future, unless new volumes come into the market, I expect Bitcoin to move into the $48,000–$50,000 range.

After that, the probability of a head and shoulders formation on the chart will increase. Within this pattern, the price could move into the $30,000–$35,000 range, which could well trigger the start of crypto winter.

I advise keeping an eye on developments and building an investment portfolio in stabelcoins to have a chance of picking up coins as part of a long-term investment in the event of a worst-case scenario.

Ethereum continues to copy Bitcoin’s moves. The first cryptocurrency’s recent collapse caused the largest altcoin to return to support around $4,000. Right now, ETH has gained some ground, but when BTC fails to break higher and the initiative is back in the hands of the bears, I expect the biggest altcoin to follow.

It’s highly likely that ETH will only be released from BTC’s embrace once the chain migrates to ETH 2.0. Already now, Ethereum, though it follows the movements of the first cryptocurrency, is doing so with some inaccuracies, which I believe are caused by fee burning, pushing the coin closer to deflation.

Don’t forget about risk management and don’t neglect stop losses. It’s not certain that crypto winter will be coming back now, but it is a good idea to be prepared for it.