Today is Wednesday, 27th October, and this is Cointribune’s Crypto analytics. You will learn about everything that’s been going on in the market, as well as what to expect next in our new article! If you’d like to read the previous instalment, please follow the link. Off we go! 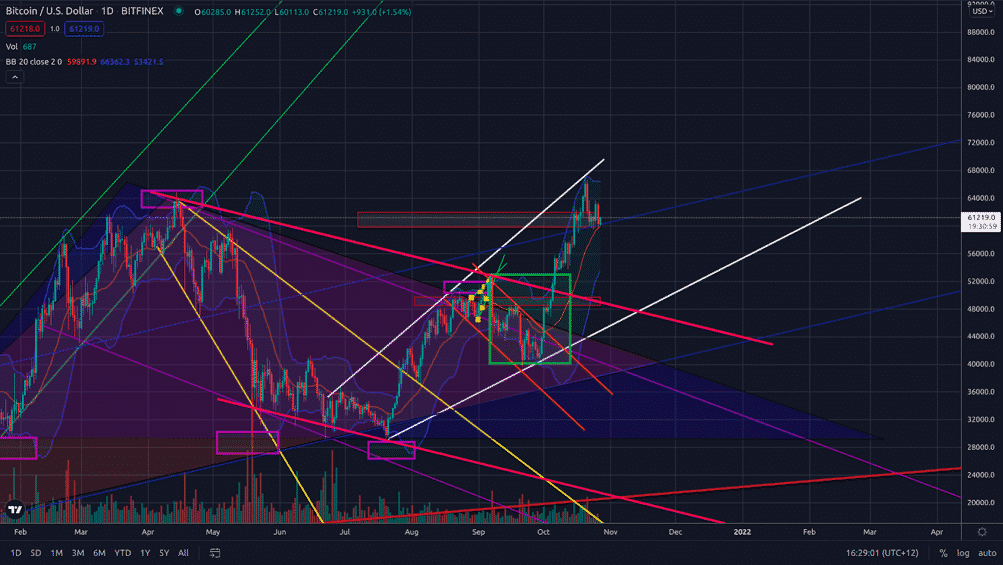 Yesterday ended with yet another Bitcoin collapse. BTC continues to be pressured by the bears, testing the $60,000 support level. For a brief moment, Bitcoin hit $59,000 but is now trading at around $61,300.

Bitcoin hasn’t yet managed to break through the resistance represented by the top of the white expanding channel. Right now, it’s being held back by the psychological level, which is backed up by the pressure of bulls at the top of the blue channel acting as support. However, it doesn’t seem that buyers will be able to keep up this level, which is key for the entire digital asset market. An early breakdown with BTC going down to the $53,000 – $55,000 area is quite likely. In the worst-case scenario, we can expect a dip to $48,000.

It’s too early to talk about the beginning of crypto winter. It’s still likely that the first cryptocurrency continues to move within a prolonged corrective wave framework, similar to the one that has already sent us to $40,000, after reaching the previous ATH.

This is good news because if BTC follows this scenario, after a while, we’ll be in for recovery and the next ATH. We can therefore assume that the whales won’t try to provoke crypto winter with their sales. Be extremely careful.

While Bitcoin is holding sales, some altcoins, including Ethereum, are trying to prove they have a backbone. Having morally supported yesterday’s BTC collapse, today, the largest altcoin has made a serious attempt to reach its ATH. As of this writing, ETH is trading at around $4,300.

While BTC falls, Bitcoin dominance index goes down as well. The share of altcoins gradually increases, provoking a partial withdrawal of players’ funds. This could signal the beginning of the altseason.

There is no such thing as infinite growth, and even though popular Twitter analysts still predict an imminent BTC pump, you should know that it might not be true. Many popular analysts unknowingly become slaves to their own forecasts. But in trading, it’s important to look both ahead and at the current situation. Right now, negative news can easily weaken the long-term potential of any asset.  And when working with money, it’s very important to take this aspect into account.