Today is Friday, 29th October, and this is Cointribune’s Crypto analytics. You will learn about everything that’s been going on in the market, as well as what to expect next in our new article! If you’d like to read the previous instalment, please follow the link. Off we go! 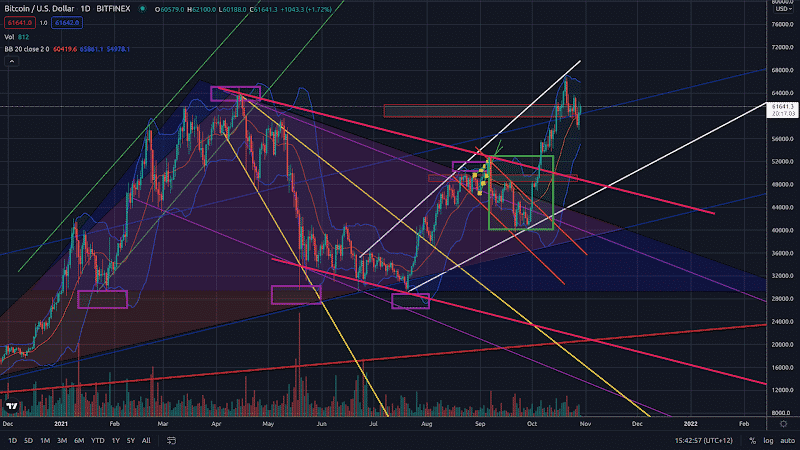 Over the past day, Bitcoin managed to fall below the local resistance level to the $57,500 area, and then return to $62,000, confirming a false support breakdown. As of this writing, Bitcoin is trading at around $61,650.

First, I’d like to point out that these days haven’t been easy for retail investors dabbling in BTC leverage trading. It’s likely that both longs and shorts had it tough, many finally starting to believe in the beginning of a global corrective wave, especially after Bitcoin suddenly went below $60,000.

The market is changeable, so we’re once again higher than the last psychological resistance. But is this a victory for buyers?

Not really. Judging by the local highs and lows, from now on, BTC is moving within the descending trading channel; its current growth is just a rebound. It will remain the same if in the future unless Bitcoin gains a foothold above one of the last local highs – around $63,500.

While Bitcoin is looking for directions of its movement, the second-biggest crypto by market capitalisation is taking advantage of the current situation to increase its influence. As of this writing, Ethereum reached the $4,371 price range and is currently trading at around $4,500.

Of course, if BTC suddenly goes head first into the abyss, in the short term, it will trigger an ETH dump as well. However, in the long run, this will undoubtedly lead to Ethereum conquering a new ATH.

Bitcoin is starting to lose ground. This is evidenced by increased altcoin activity, which is gradually taking over BTC’s domination of the market. It’s probably unreasonable to expect exponential growth from Bitcoin. So be careful!