Today is Tuesday, 30th November, and this is Cointribune’s Crypto analytics. You will learn about what’s been going on in the market, as well as what to expect next in our new article! Make sure to have a look at the previous instalment. Off we go! 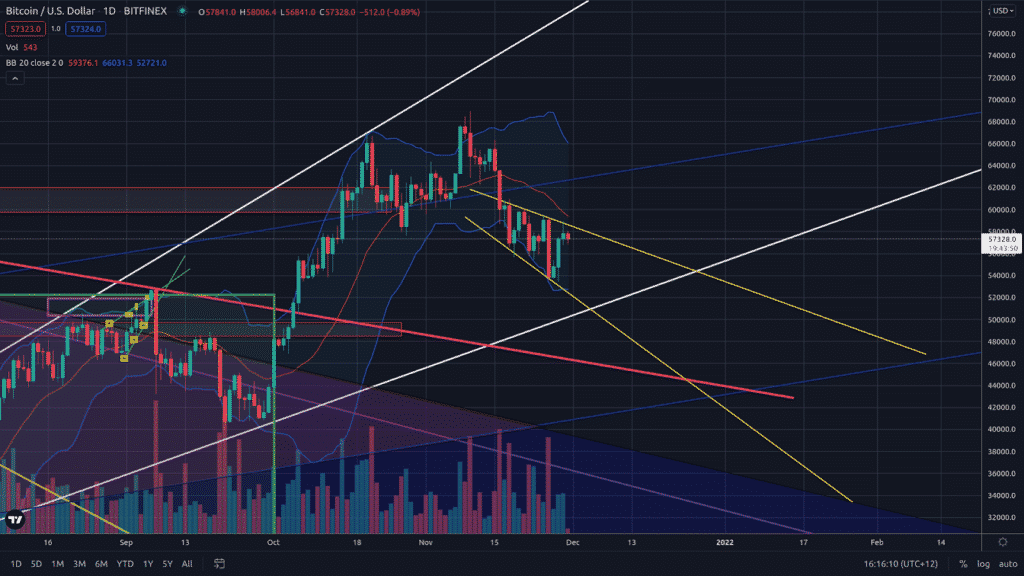 Bitcoin has started to decline again. The attempt to break through resistance ended in failure, so the first cryptocurrency’s next move is likely to be towards the lower end of the yellow descending broadening channel.

Under normal circumstances I would state that Bitcoin will fall, and no miracle should be expected. However, tomorrow is 1st December, which means we’re on the verge of a new monthly candlestick formation and there’s a possibility of a change in the market picture. In order to avoid further sell-offs, manipulators can bring in the volumes they need and provoke retail players to buy aggressively in order to drive BTC to the price range they need.

A double-top pattern is clearly visible on the monthly timeframe. It signals that the bulls failed to break through the resistance twice, which in turn should result in the initiative going to the bears, who will trigger the dump. If we look at the pattern globally, we might see a long but sure decline down to the $15,000–$20,000 price range in the worst-case scenario. This, in turn, is a strong signal for the start of the prolonged crypto winter.

However, I cannot state conclusively that all of the above is bound to happen. For that, we need to wait for tomorrow’s candle on the chart and monitor how BTC will behave throughout 1st December. There’s still a chance that the price will be pulled higher in order to avoid a spread of bearish sentiment in the market.

Based on the above, I believe we’re likely to see a dump. However, discounting the fact that the cryptocurrency market is not stingy with manipulation, I believe that today/tomorrow BTC may try to move above the $60,000 mark. Be on the lookout for that.

Ethereum continues to move within a triangle. Having reached its upper border, which is resistance, the second-largest cryptocurrency has started to show weakness again, which suggests that we should expect ETH to collapse.

However, BTC will still have the last word, so keep a close eye on its moves.