Today is Tuesday, 9th November, and this is Cointribune’s Crypto analytics. You will learn about everything that’s been going on in the market, as well as what to expect next in our new article! If you’d like to read the previous instalment, please follow the link. Off we go! 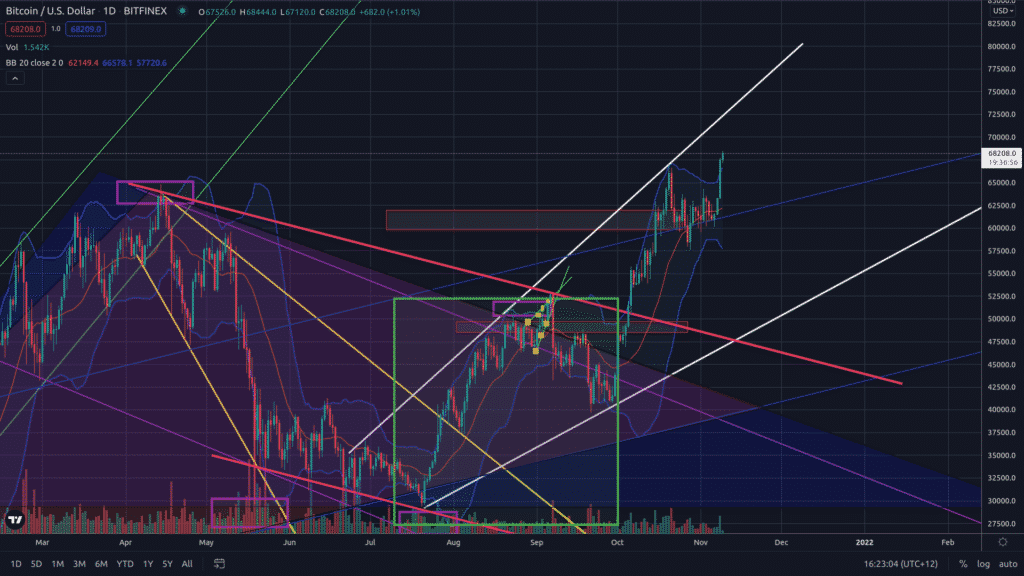 As I anticipated in the previous issue of our analytics, Bitcoin didn’t stagnate for long, but made a determined attempt to move above the last all-time high and consolidate higher. Thus, BTC reached a new ATH and at the moment of writing, the asset is trading around $68,200.

As a result, we have a protracted flat, followed by a good pump. This will certainly shake things up a bit for the waiting players, but it’s still too early to say that the Bitcoin will go only up now. $68,000 is also an important level, followed by psychological resistance at $70,000. Although, in defence of the longs, we can add that before that, BTC was moving exactly within the white broadening trading channel. This means that even with a possible new flat, the first cryptocurrency should be expected at least at $72,000.

How long the first cryptocurrency will move in this range is hard to say. However, I still urge you to be prepared for the white broadening trading channel to finish its formation. In that case, there’s a high chance that Bitcoin will drop out of it, going as low as $40,000. However, it’s still too early to consider such a scenario. Even though an ascending broadening channel, in most cases, ends up with a major crash, there’s no reason to believe that we won’t go higher in case the necessary volumes are in the asset.

At this stage, we watch the attempts to reach the $70,000 level, and based on their success we draw conclusions about the future of BTC.

Following Bitcoin, Ethereum also reached its new ATH. At the time of writing, the asset is trading at around $4,800; at one point, it almost reached $5,000.

$5,000 for 1 ETH, a price that enthusiasts could only dream of a few years ago. On the technical side, ETH is moving within the red trading channel and the blue ascending channel at the same time. However, it doesn’t look like the price of the second most capitalised cryptocurrency is in any way dependent on them. Right now, ETH reacts only to Bitcoin moves. So, its price should only be forecast based on the situation with BTC.