Today is Thursday, 30th September, and this is Cointribune’s Crypto analytics. You will learn about everything that’s been going in the market, and also what to expect next in our new article! If you’d like to read the previous instalment, please follow the link. Off we go! 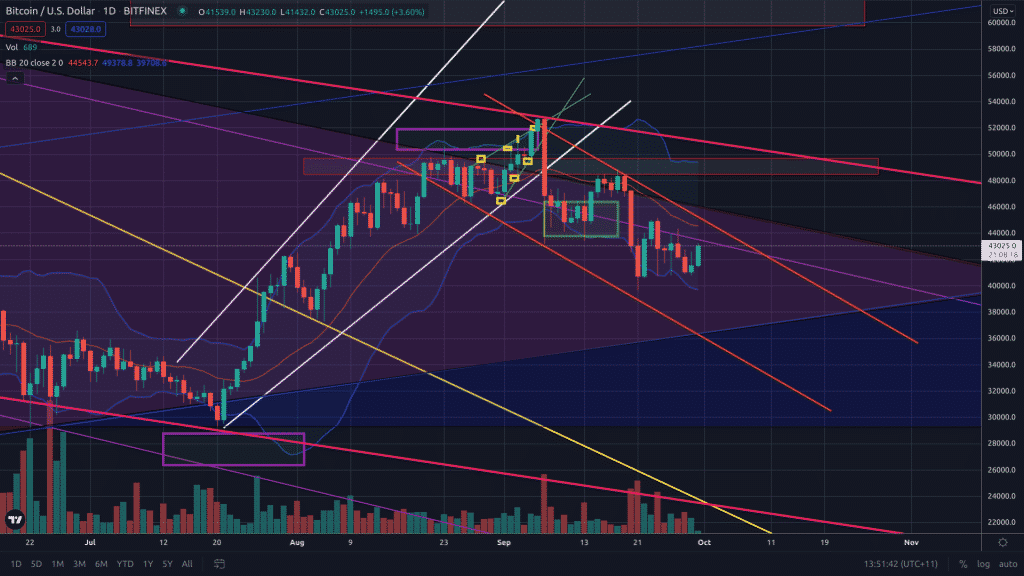 If you’ve been wondering when this crypto roller coaster will finally end, then the answer is likely “Never.” At least not anytime soon. After Bitcoin kicked off the previous day with a solid increase and ended it with an equally solid drop, it decided to mark the end of the month with another micro-pump. At the time of writing, BTC is trading at around $43,500, which it hit just minutes after the above chart was created.

Locally, the flagship coin continues to move within the downward trading channel. However, the fact that in the past few days there has been no new minimum below $40,000 and that the asset price itself is steadily pressing against the upper border of the trading range, implies that BTC has just about gathered enough strength to move higher. Only sudden negative news feeds can seriously correct it, and, sadly, there’s quite a bit of room for those.

One of the key decisions that cryptocurrency markets will face in the near future is the US verdict on raising the government debt limit. In case the answer to this question is no, panic and crashes will ensure across the financial markets, which will naturally have a negative impact on BTC. Even though it’s clear what the decision will be, it’s still advisable to watch the unfolding of the events very closely because at any point the situation may change.

On the other hand, the dollar is getting more and more support as of late. This is evident from the increase in the US dollar index (DXY), which could negatively impact the financial markets and gold. The above suggests that people don’t want to relate USD to assets and precious metals, even though the country is on the verge of default. This also may be due to the fact that many expect financial markets to crash.

Another important factor that may affect the state of the cryptocurrency market is the ongoing saga of the Chinese developer Evergrande. The company is still in a deplorable state and recently, it missed the deadline for another repayment of its obligations. Evergrande is known to be selling a $1.5 billion (~£1.12 billion) stake in its own bank, Shengjing Bank, so it can pay off its current debts. However, the total debt of the developer at this point exceeds $300 billion (~£223 billion), and the Chinese authorities are not going to solve this problem alone. Instead, they contracted the business to buy up the developer’s illiquid shares at a loss, just because they can. For now, the situation may be relatively stable, but most likely, Evergrande will yet remind of itself to all markets, including crypto.

However, the recent appeal by the head of the US Securities and Exchange Commission (SEC) Gary Gensler may become a positive change for Bitcoin. The politician announced that the SEC is starting to consider applications for launching BTC Bitcoin futures ETFs (exchange-traded funds). The head of the SEC attributed the delay in making this decision to the fears that the regulator would simply get overwhelmed with similar applications, which could lead to market manipulation. Be that as it may, the launch of ETFs could seriously re-incentivise all the discouraged bulls, as it will unlock the path for institutional investors to enter the market with new volumes. We can only hope that applications will be considered quickly, and the demand for such products is not exaggerated.

Another noteworthy event occurred yesterday. In continuation of the Chinese saga of the struggle between the authorities and private cryptocurrencies, the “decentralized wallet” imToken banned its China users from accessing decentralized exchanges (DEX) and DeFi. Such a turn-up is remarkable in that a service that initially poses itself as “decentralized”, can restrict the freedom of its users just like that, seemingly on a whim.

The current movement is still fully in line with the global bullish picture. We are still operating within a triangle whose key element is the “bullish wedge”. Consolidation (accumulation) is an invariable factor in this pattern, which we can also observe on higher time frames. Visually, it looks like a series of green and red candles on the chart, forming towards the upper and lower walls of a narrowing trading range. Instead of two parallel lines, we have two walls (same lines) moving in the same direction, but showing a clear tendency of convergence.

In the big picture, the situation has not changed for Bitcoin. We are still in accumulation, and in case there is a drop, you can take advantage of it. The first key support region is at $40,000, which is also an important psychological level. The next one is $35,000, which acts as a support within the triangle pattern. The next stop on the potential move down is the area around the $30,000 mark, which is the upper border of the expanding descending trading channel (yellow). And the last one is $20,000, acting as the lower border of the downward purple trading range.

There is no growth without corrections. So you shouldn’t view a mere drop in price as the beginning of the coin’s imminent downfall. Even bulls need to take profits. The idea is that when the price goes lower, you can buy even more assets with the money earned to keep them until the growth dynamics allows you to count on the best.

The payoff is near. Several dumps may still await us, but that would still fit within the triangle. Globally, however, the way out of this formation would be a strong Bitcoin pump, which would likely push it above all the last notable resistances, thereby provoking purchases from those who’d sold the asset earlier.

Ethereum continues to mimic the dynamics of Bitcoin. The largest altcoin kicked off the new day with an impressive leap up. As of this writing, it is trading near $3050.

In general, the situation is very similar to preparing for a pump. Of course, there can still be an influx of negative news that will send the cryptocurrency market to the next round of correction. However, the fact that the last two local minimums of both ETH and BTC are at the same level indicates that the assets have both found a steady level of support that they can push off and continue to grow. If there is no interference, then ultimately, the second-largest cryptocurrency (just like the first) will make an even more impressive leap upward, and, in the future, they both will get out of the local bearish trend.

The fear in the market continues to set new records. Most likely, at this stage, there is almost no one to provoke the sale of assets. Those who were ready to close their positions have long since resorted to stablecoins or even fiat. And those who still haven’t sold their portfolio are unlikely to get rid of it anytime soon, even if BTC starts trading at $3000.

All of the above indicates that the market is preparing for a breakthrough. The pendulum will soon be swung again, and after that, the money-pumping machine will be back in full swing.

To drop the price any lower in the short term is now unprofitable for anyone, except perhaps some bears that are stuck in short positions, the elimination of which will also become a significant incentive for the further rise of both BTC and therefore, the rest of the market.

It is possible that right now is the last chance to equip your investment portfolio as profitably as possible.

The top ten cryptocurrencies by CoinMarketCap look positive. Cardano (ADA) is about to retake third place in the rankings, and Binance Coin (BNB) is suddenly up by more than 10%. The market is getting ready to go green.

OMG Network (OMG) becomes the gainer of the day. Over the past day, the asset has brought its holders about 19% of the profit. If there are signs of growth in BTC, this coin may also head towards the last global high.

Compound (COMP) becomes today’s loser. This asset has already brought more than 9% of losses to its holders. However, judging by the graph, the coin has almost reached its bottom, so it would probably make sense to take a closer look at it.

Another collapse may still be waiting ahead as the situation with the US, which finds itself on the brink of default, has not yet been resolved. However, positive news from the SEC and the market reaching a zone of extreme fear predict an imminent change in digital assets. It’s best to prepare your portfolio for growth.