Today is Thursday, 7th October, and this is Cointribune’s Crypto analytics. You will learn about everything that’s been going in the market, and also what to expect next in our new article! If you’d like to read the previous instalment, please follow the link. Off we go! 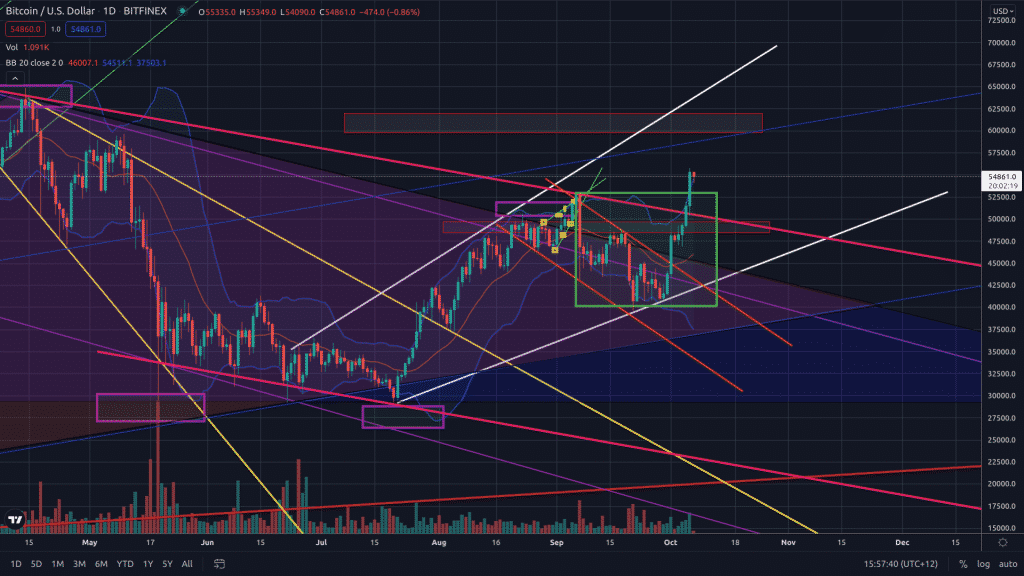 Bitcoin continues its ascent. The first cryptocurrency not only consolidated above the $51,000 resistance, but also gained strength for another significant and very important spurt. As a result, yesterday marked the day when BTC reached the $55,000 price range. At one point, the biggest digital asset even reached $55,790, and right now, it’s trading near $55,200.

Bitcoin finally broke out of the triangle, overcoming one of the resistance levels set by the previous all-time high, and announcing the bull market’s continuation. Traders and investors who took advantage of the crash and added to their portfolios are now reaping the rewards of their labours, as sceptics and pundits, who had been whining about crypto winter a week ago, fell silent again.

The psychological resistance zone of $60,000 is just around the corner, and its strength is bolstered by the fact that it’s so close to the first cryptocurrency’s all-time high.

If BTC’s growth rate remains unchanged, by the end of this week or next week we will have updated the all-time high, however, we should also bear in mind that the more optimistic the market is, the more likely it is that euphoria will flood in, triggering a collapse.

Locally, the momentum is bullish. But the start of a new round of the bull run can only be confidently announced once Bitcoin has passed the last all-time high.

Ethereum continues to make attempts to reach $4000, however, now Bitcoin is affecting it in a slightly different way. ETH is no longer able to blindly follow BTC and all its moves resemble incomplete or lagging patterns of the first cryptocurrency.

Most likely, the problem is that if Ethereum used to blindly copy any movements of BTC, while other altcoins started behaving bullish, stalling, or losing value altogether, now ETH has suddenly realized that it’s an alternative cryptocurrency and started to act accordingly. This is due to Bitcoin’s growing market share.

Extreme greed has returned to the market, according to the Fear and Greed Index, which can only indicate one thing: people truly believed in growth and lost all caution. This will almost certainly conclude with a local BTC drop, as there isn’t any other option. Stop-loss orders are a good way to hedge your bets. There isn’t much longer before the euphoria sets in. It’s more likely that after $60,000 is achieved, retail players would begin buying Bitcoin at any price, creating ideal conditions for whales to sell their volumes in the shadow of the countermovement.

The top ten altcoins according to CoinMarketCap have turned red. However, this is not a negative trend at this stage, but just a breather dictated by the Bitcoin Dominance Index. Alternative digital assets are marking time or declining slightly while BTC is trying to climb higher.

Noteworthy highlights are that Solana (SOL) has once again lost its place to Ripple (XRP) and Dogecoin (DOGE) has managed to give up its position to the unchanging USD Coin (USDC) stablecoin.

Incredible as it may seem, but once again the meme-currency Shiba Inu is the gainer of the day. Thanks to the efforts of an unknown whale and the enthusiasm of the crypto dog fans, the asset has already yielded its holders about 72% over the day and about 325% over the past week.

Relying on the chart to speculate on the coin’s prospects makes no sense.  The whole move is pure manipulation, which will probably end soon.

The loser of the day is Avalanche, which has already brought its holders about 8% loss.