Will the Heir to Bitcoin Come From a Football Stadium? Lagardère Sport partners with Socios

On 17th February 2020, the sports arm of the powerful French communications group Lagardère announced that it had formed a strategic partnership with Socios, the Chilean entity behind the success story crypto Chiliz (CHZ). Chiliz promises nothing less than to tokenise football clubs, giving power to their communities of fans, who will finally be able to influence decisions about their favourite teams. This is a powerful combination with promising potential, which does not seem to have slipped past the Lagardère group. Will Bitcoin’s successor be found out on the football field? Will the prophesised heir find the hearts of the general public better than its respected elder? We’ll talk about it today on TheCoinTribune! 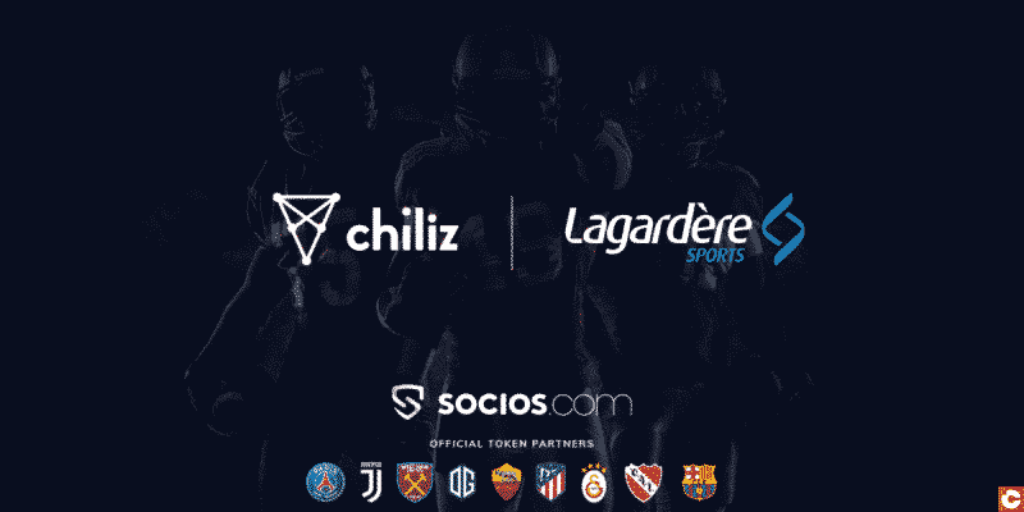 There is undeniably something going on between the world of sports and the crypto industry. Just a few weeks ago, TheCoinTribune was already wondering whether you should be looking to invest in this area, which could prove to be a real game changer. Although the crypto space is young, every now and again revolutionary ideas do pop up.

Of course, as soon as we talk about crypto and sport, we immediately think of Socios and Chiliz. This consortium has recently been stepping up its efforts to partner with prestigious football clubs.

See for yourself: West Ham, PSG, Juventus, AS Roma, and more recently FC Barcelona. All in all, we are looking at nearly a dozen clubs already on board.

So many prestigious clubs now have their own dedicated tokens. JUV for Juventus, BAR for FC Barcelona, and the list goes on. Token owners will be able to influence certain decisions about their team, they will be given exclusive access to private events, and can get discounts on purchases.

In short, these tokens are the efficient synthesis of a fan club subscription and a traditional loyalty card, supercharged by crypto! What’s more, owners of the club’s token have a piece of decision-making power over the fate of their team.

What is certain is that the process will, sooner or later, involve the majority of teams, from the most prestigious, to the most modest, who might be on the lookout for a way of monetising their club. You might be interested by MyTVChain, whose video monetisation model caught our attention.

The well-known Lagardère group has perfectly grasped the potential of this emerging industry. So, it didn’t take long for a partnership between Lagardère Sport and Chiliz to be formalised. It took place in Malta a few days ago.

Lagarère and Chiliz, Football and Crypto: a formidable combination

With six French and 16 German football clubs under its belt, including exclusive agreements with Borussia Dortmund, Hamburger SV, Olympique Lyonnais, AS Saint Etienne and OGC Nice, the sports arm of communications giant Lagardère is not really here as a benchwarmer.

The parent company, French group Lagardère, has a presence in 40 countries, covering press groups, radio and more than £6 billion of turnover. As such, the signing of the partnership between Lagardère Sport and Socios/Chiliz on 17th February was a time for enthusiasm:

“We are proud to have signed this strategic partnership with Socios.com. This agreement rewards our ability to look to the future and our belief in the development of new technologies such as the blockchain and cryptocurrencies. As a leading sports marketing agency, we have a right to offer the best solutions to our customers and partners, and this partnership will make a very significant contribution.”

On Socios’ side, Alexandre Dreyfus reminds us that this partnership looks good, but it is only the beginning:

“We were clear with our 2020 goal for the Socios app to get 50 partners, and I am delighted that we will benefit from the support of Lagardère Sports to achieve it. Through its extensive network of athletes, clubs, federations and professional sports leagues, we will work together to build the future of fan engagement for rights holders in France and the United States.”

Crypto extends in all directions, conquering the most varied territories. Meanwhile, their common ancestor, Bitcoin, charts its course unflinching, block after block. While sports club tokens could replace the Panini stickers of our childhood for children born in 2020, there is no doubt that the multiple pretenders to Bitcoin’s crown still have many surprises in store for us.