Binance Smart Chain is preparing to launch the Priority ONE programme to allow coders, cybersecurity specialists and white hat hackers to identify bugs and vulnerabilities of the network on a fee basis. 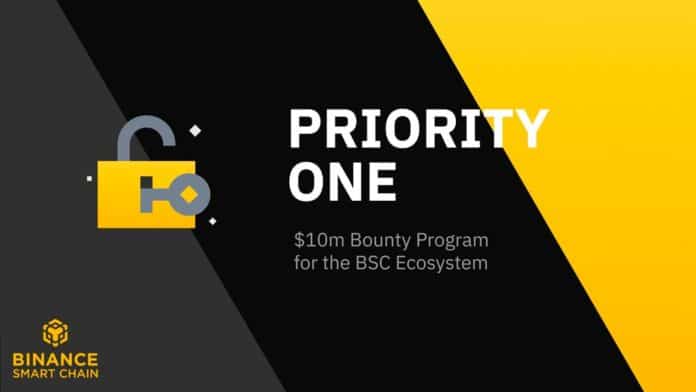 Binance Smart Chain (BSC), the brainchild of Binance, is a state-of-the-art blockchain with high transaction capacity and smart contract functionality. The platform runs on Proof-of-Stake Authority (PoSA), a combination of Proof-of-Stake (PoS) and Proof-of-Authority (PoA) protocols. BSC is highly appreciated by many enthusiasts and developers who had suffered from high fees on the Ethereum blockchain.

Binance is aimed at boosting the network security by establishing a $10 million (~£7.2 million) bounty pool to reward specialists for detecting exploitable vulnerabilities and possible attack vectors. Priority ONE was made possible through $3 million (~£2.2 million) of Binance investments, the rest of the pool is planned to be funded with a portion of validator fees as well as donations from projects on the BSC network. The bounty fund is named Priority ONE since Binance representatives believe security to be a number one priority for both the users and projects running on BSC.

The bounty fund is ready to reimburse up to 50% of the reward for major bugs detected, provided they are first reviewed by PeckShield, CertiK, Immunefi and the Binance security team.

Projects willing to participate are required to have passed at least 2 audits or security certifications and “show a serious dedication towards improving their security” by allocating at least $100,000 (~£72,000) towards the bug bounty programme.

The number of hacker attacks on blockchain projects is promptly growing, which is a matter of concern for the crypto market players. BSC has revealed its incentive to improve software security by launching the new bug bounty fund Priority ONE. Only time will tell whether the programme is justified and capable of paying off Binance abundant investments.