Today is Thursday, 14th October, and this is Cointribune’s Crypto analytics. You will learn about everything that’s been going on in the market, as well as what to expect next in our new article! If you’d like to read the previous instalment, please follow the link. Off we go! 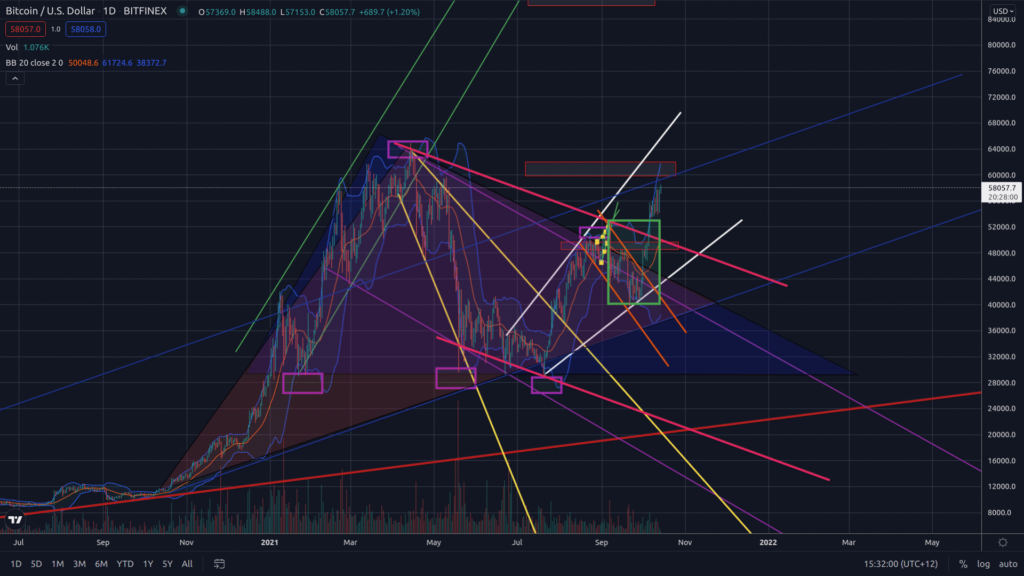 After a significant pullback, the first cryptocurrency gained strength and headed for another retest of resistance. After falling to values close to $54,000 at some point, at the time of writing, Bitcoin has rebounded and is now trading at around $58,100. This is an important level which, if broken, will pave the way to reaching and then surpassing the latest all-time high.

There is not much left before the global trend change – just two resistances, one of which is dictated by the top boundary of the blue trading channel and the other is the area of influence of the last all-time high. Once these two levels are overcome, the global bull run will return to the market and the crypto community itself is likely to succumb to euphoria.

If the market growth is not interrupted by the whales at this point, the biggest digital asset will gain momentum for an ascent up to the range of $106,000–$115,000. However, this is only the most optimistic of expectations.

It will all depend on how high the whales allow us to go. Moreover, various sudden shocks and negative news could also seriously influence the BTC movement pattern.

Overall, based on the dynamics, I look at the current move with optimism. In case of a consolidation above $58,000 the growth will continue, but if we fail to capture this zone several times and the bulls run out of steam, we will be pushed back all the way to the level of $48,000–$50,000.

Ethereum attempted to disrupt the established momentum and even reached $3,750 at one point. However, Bitcoin made another effort to ascend, and the second most capitalised cryptocurrency had to take a few steps back to its current price level of $3,650.

Ethereum, like other alternative digital assets, is waiting for the first cryptocurrency to run out of steam and go flat. Only then will the altcoins gain enough strength to burst out of the gate, pass current resistance levels and most likely renew their all-time highs. Well, we’re looking forward to that.

The situation in the digital asset market is quite complicated. Bitcoin is on the rise, which of course is encouraging. However, that same growth is preventing most altcoins from realising their potential. So far, only a few of them deliver solid gains. For all the rest, we just have to wait for the situation to change.