Today is Thursday, 4th November, and this is Cointribune’s Crypto analytics. You will learn about everything that’s been going on in the market, as well as what to expect next in our new article! If you’d like to read the previous instalment, please follow the link. Off we go! 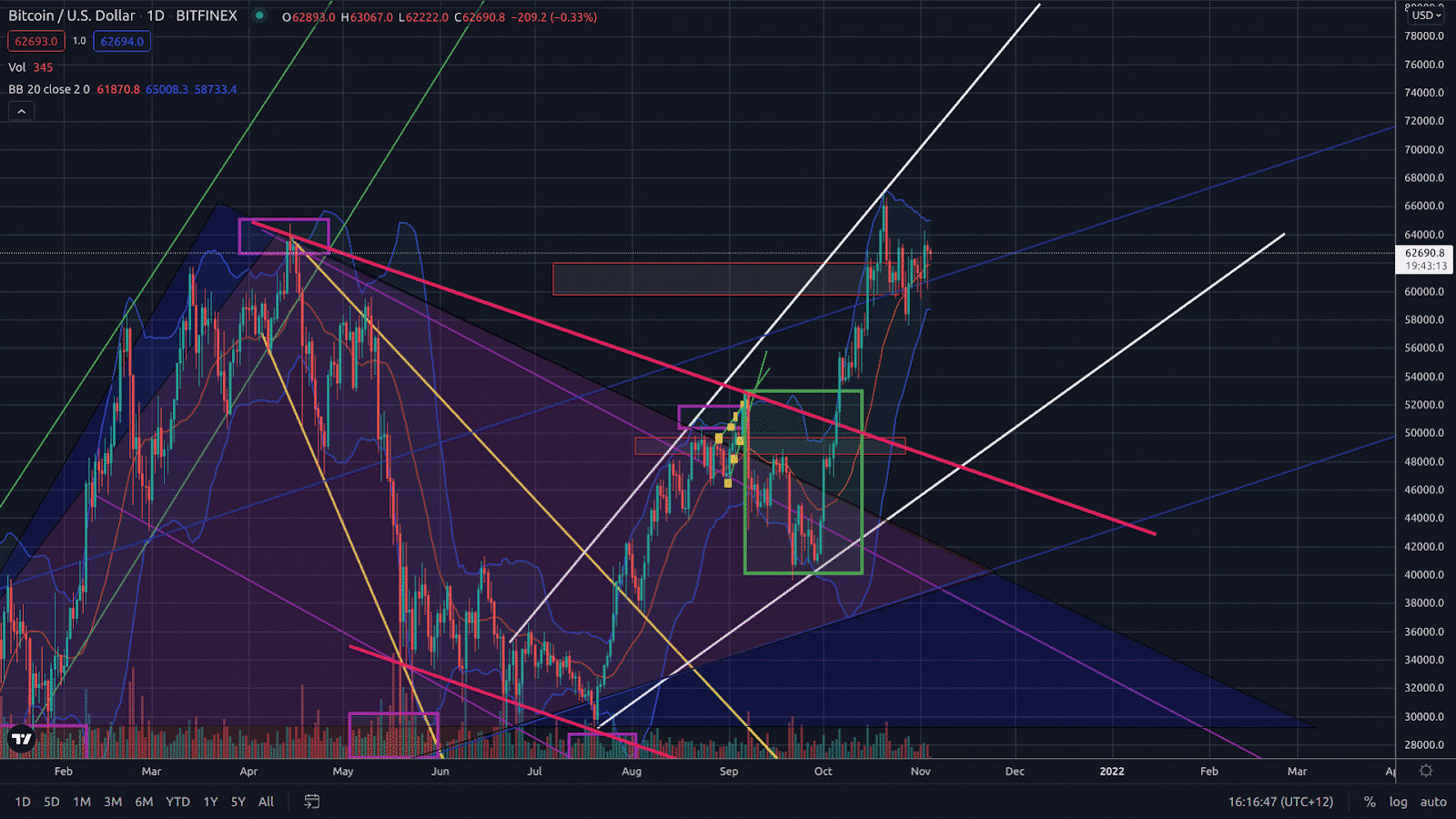 Bitcoin has managed to pull off a new local high, thus avoiding a collapse and consolidation below the $60,000 level. As of this writing, the flagship coin is trading near $62,800.

At some point, BTC reached the top of the expanding trading channel and then fell well below, right into the range of ​​the most significant support at the time. Having avoided fixing below the important psychological level of $60,000, it then shifted to a brief flat, which, nonetheless, could end at any minute.

If we consider the scenario in which Bitcoin will continue to grow, we must also consider the fact that in case of a collapse and consolidation below $60,000, we may again find ourselves trapped in a cycle that is clearly noticeable at the beginning of the expanding white trading channel.

The range in question is marked on the chart with a green square. That’s where the first cycle of Bitcoin’s current global growth occurred. This movement ended with a collapse, within which, we tested the support level at the lower border of the expanding trading channel and on 1st October once again returned to growth.

At this point, if the $60,000 support is breached, we might be looking at a repeat of this scenario which would see BTC price shift even lower, down to $47,000.

If the current support copes with its role, we will again go to retest the resistance at the upper border of the white expanding channel. Then, in case of consolidation above the resistance level, euphoria may ensue, prompting a new wave of purchases and therefore boosting the price even further.

Ethereum has finally plucked up the courage and at the moment, has even reached the price level above $4,750, for the first time since May, updating its ATH. However, ETH could not find the strength to gain a foothold in the new range, so its lost ground a little and, at the time of writing, is trading around $4,580.

Ethereum began to grow on 28th September. Since then, on the global scale, its rate hasn’t really changed. The largest altcoin is confidently moving forward, albeit in small steps, thus ensuring that each of its subsequent highs and lows remains well above the previous ones.

At the moment, Bitcoin is looking rather controversial. An extra level of care when closing your deals is, as always, advisable.