Today is Friday, 8th October, and this is Cointribune’s Crypto analytics. You will learn about everything that’s been going in the market, and also what to expect next in our new article! If you’d like to read the previous instalment, please follow the link. Off we go! 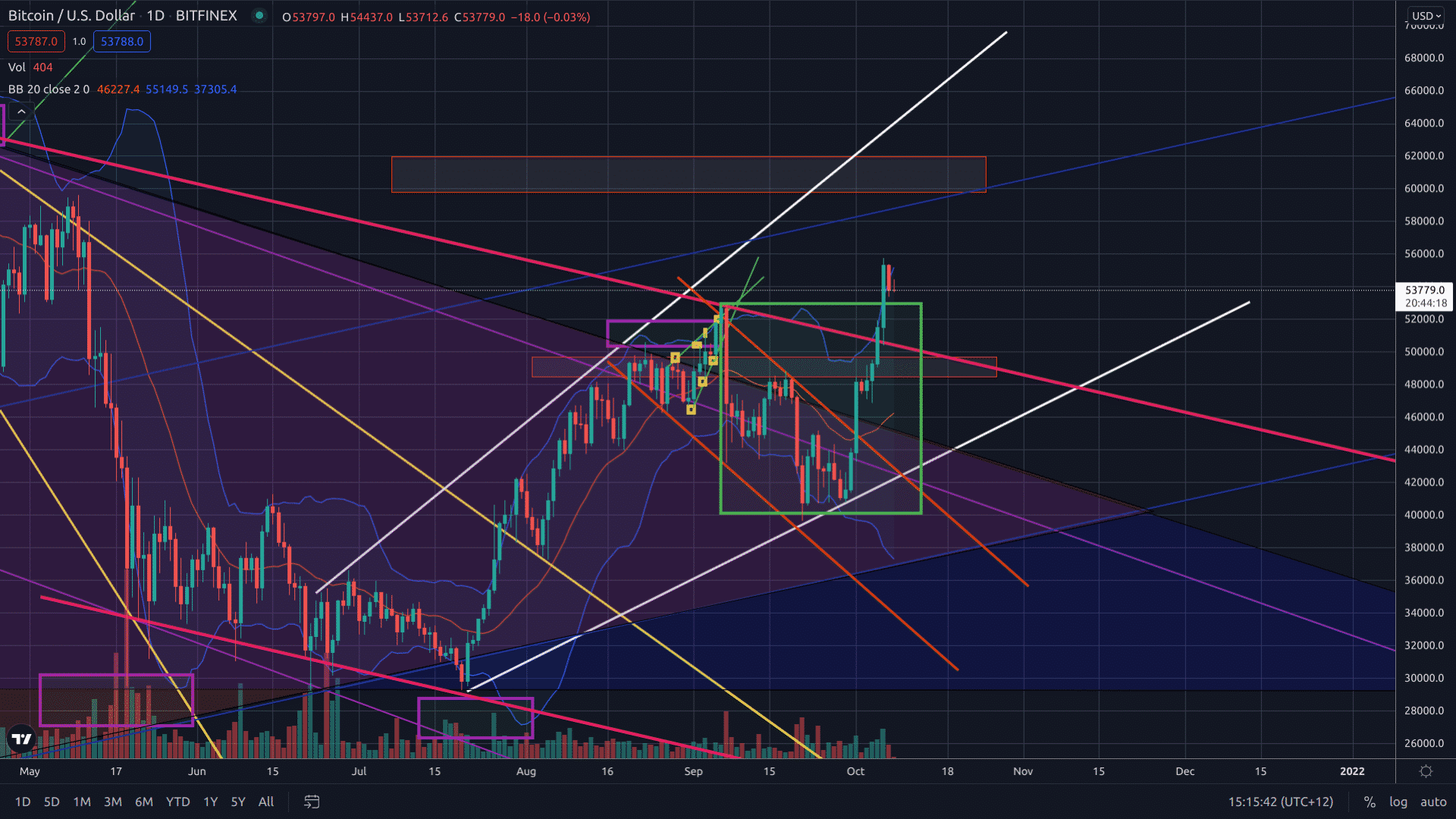 There’s no such thing as endless growth. Confirming this fact, Bitcoin closed the previous day with a solid red candle, although today we have all chances to witness a reversal. At the time of writing, BTC is trading around $53,734.

In the last 24 hours, the first cryptocurrency has lost around $2000. However, after such an impressive rise as we have seen since 1st October, a small correction seems to be legitimate. Some of the short-term players want to lock in profits, so they’re closing their long positions.

That said, I believe that after a short breather and a flat, growth will continue. The $50,000 level is now the most significant support for us, and to avoid reverting, in case the bulls run out of steam, we need to form another support somewhere close.

We shouldn’t forget that Friday is the harbinger of a fun weekend when anything can happen in the cryptocurrency market. It’s highly likely that by the end of today, the first cryptocurrency will have made another strong-willed move and come close to $60,000.

Anyway, the tension in the market has subsided. It will balance the Fear and Greed Index a bit, extending the time when the whales will allow the price to rise. And if the bulls hold this level, it will turn into new local support, after which BTC will resume its climb to new highs.

The weekend may be full of unexpected movements, however, at this stage, I personally feel positive. Obviously, these are just my own thoughts and not investment advice. Stop-losses are key.

The second most capitalised cryptocurrency, although influenced by BTC, closed the previous day on the rise. Ethereum is currently trading near $3575.

The biggest altcoin has reached the resistance dictated by the white trading channel and is now gearing up to break higher. However, if ETH is unable to do so in the next few days, the resistance test will fail and Ethereum could head towards support, the closest of which is in the $3000-$3200 range.

In addition, ETH will be negatively impacted by the latest global high around $4000, which is right near the top of the blue broadening channel. Until the $4000 barrier is breached, this high will act as dynamic resistance, which will send us lower and lower with each new peak below it.

We shouldn’t forget that apart from its own factors, ETH is also influenced by BTC, so a move higher could happen faster than we think.

The Fear and Greed Index has retreated slightly, giving up extreme greed for normal greed. The change is minor, and the state of euphoria in the market is still a long way off. Disregarding local correction waves, there’s no reason to believe Bitcoin’s rise is over. Only an unexpected development in the US debt limit crisis can upset the apple cart, but there’s still time.

Almost all of the top ten altcoins are in the green zone. However, this is only a deceptive first impression. Bitcoin is still red. Under pressure from this factor, alternative cryptocurrencies are also starting to lose value. Treat it as just another chance to top up your portfolio.

The gainer of the day is not Shiba Inu (who would’ve thought), but Fantom. This asset has already brought its holders about 30% profit.

And the loser of the day this time is the champion of the last few days. Shiba Inu has already brought its holders about 25% loss. However, there are still traders who believe that this coin will have another round of growth.

I will refrain from commenting on this issue, as SHIB is pure manipulation. So even now, when the coin is overbought, at any time another whale may come along and spend another $50 million on it and send this asset to the moon.