Today is Wednesday, 6th October, and this is Cointribune’s Crypto analytics. You will learn about everything that’s been going in the market, and also what to expect next in our new article! If you’d like to read the previous instalment, please follow the link. Off we go! 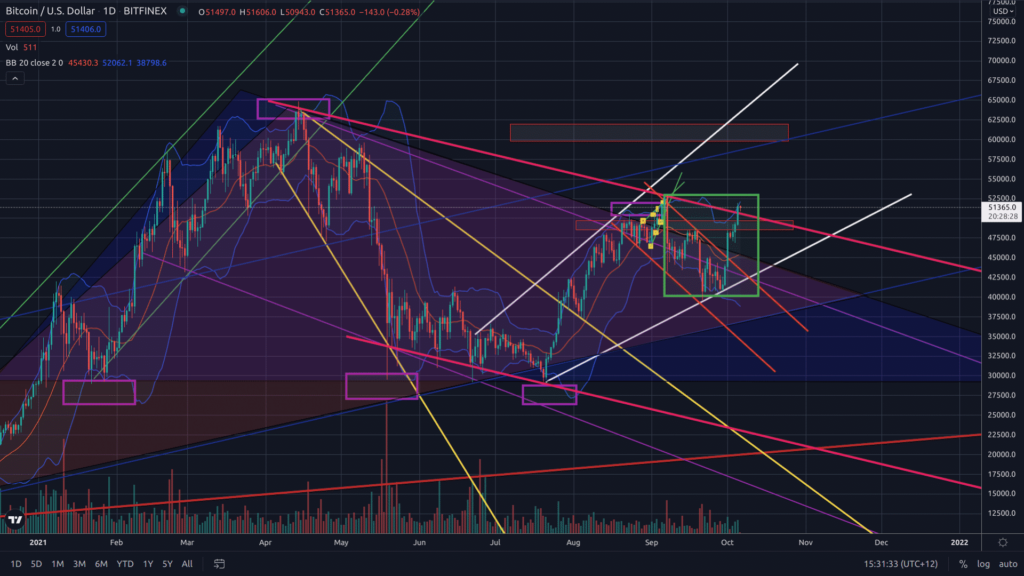 Yesterday, the first cryptocurrency successfully broke through one of the key resistances and consolidated above the $51,000 level. At the time of writing, Bitcoin is trading at $51,500.

The latest move was not only a follow-up to the inverted head and shoulders formation, but also a confirmation of BTC’s breakout from the triangle. The only thing holding us back is the dynamic resistance marked on the chart by the upper pink line. After it’s broken, the path up to $60,000 will open for the first cryptocurrency.

If the resistance marked by the pink line prevents BTC from going higher, the price will correct. However, falling to the support level doesn’t contradict the overall bullish picture. It’s a fallback in case the bulls suddenly run out of steam and we find ourselves under the bears’ pressure again.

Otherwise, I don’t see any obstacles for a further positive Bitcoin scenario. The whales, of course, can topple the market at any moment, but at this point, it’s not beneficial for them to do so yet.

Crypto enthusiasts have just started buying in, and there’s no euphoria now. The market environment is not too favourable for selling large volumes right now. If a collapse is triggered now, when the whales start selling, their average price will be too low, minimising the potential returns. To prevent that, the big players must first bring the market to a state of euphoria, when retail investors will actively buy BTC at any price in the hope of further growth. Only then the whales will be able to trade as profitably as possible against the general trend, without the risk of triggering a collapse in the first minutes of their own selling.

Either way, it is still too early to start selling actively. Bitcoin will continue to rise and only when it reaches a resistance level, the whales will slowly start to close their trades.

Ethereum, the second most capitalised cryptocurrency, has stopped following Bitcoin blindly. The largest altcoin is stuck within an ascending white channel, which resistance is preventing ETH from shifting towards the upper boundary of the blue broadening channel.

At the time of writing, the largest altcoin is trading around $3500.

Ethereum, like other alternative currencies, has changed its behaviour. Currently, it rises only during Bitcoin hiatus. At other times, the asset stagnates or even loses value. This phenomenon is related to the level of Bitcoin’s dominance over alternative digital assets.

The Fear and Greed Index continues to shift towards greed. There’s still nothing to worry about now, but it’s worth being on guard, as judging by Bitcoin’s momentum, we’re not long away from reaching extreme fear.

The fourth quarter of the year, on the other hand, has always been positive for cryptocurrencies. The only exception is the periods in which the market was driven by the so-called crypto winter. However, it doesn’t look like until the end of this year we should expect anything other than local correction waves.

However, no asset can grow indefinitely. Especially in a market as volatile as the cryptocurrency market. It’s quite possible that the beginning of next year will be a repeat of 2018, when, after a staggering rise in digital assets, cryptocurrency prices collapsed suddenly, and a two-year crypto winter began.

The top 10 alternative cryptocurrencies according to CoinMarketCap are almost all in the green zone. The September drop is far behind us, and now trading is finally no longer boring and monotonous.

Dogecoin (DOGE) deserves a special mention. The meme-currency pushed USD Coin (USDC) stablecoin aside and took its place in the CMC ranking.

For the second day in a row, Shiba Inu is the top gainer. Remarkably, it turned out that Elon Musk’s tweet with a picture of Floki had no effect on the ‘crypto dogs’. Meanwhile, SHIB’s price was affected by a $43 million (~£33 million) purchase made by an anonymous whale. Elon, is that you?

Either way, the ‘Dogecoin killer’ has brought its holders around 60% profit in 24 hours and over 200% in the last week.

The loser of the day is ICON. This asset has already generated about a 12% loss for its holders.