Today is Friday, 1st October, and this is Cointribune’s Crypto analytics. You will learn about everything that’s been going in the market, and also what to expect next in our new article! If you’d like to read the previous instalment, please follow the link. Off we go! 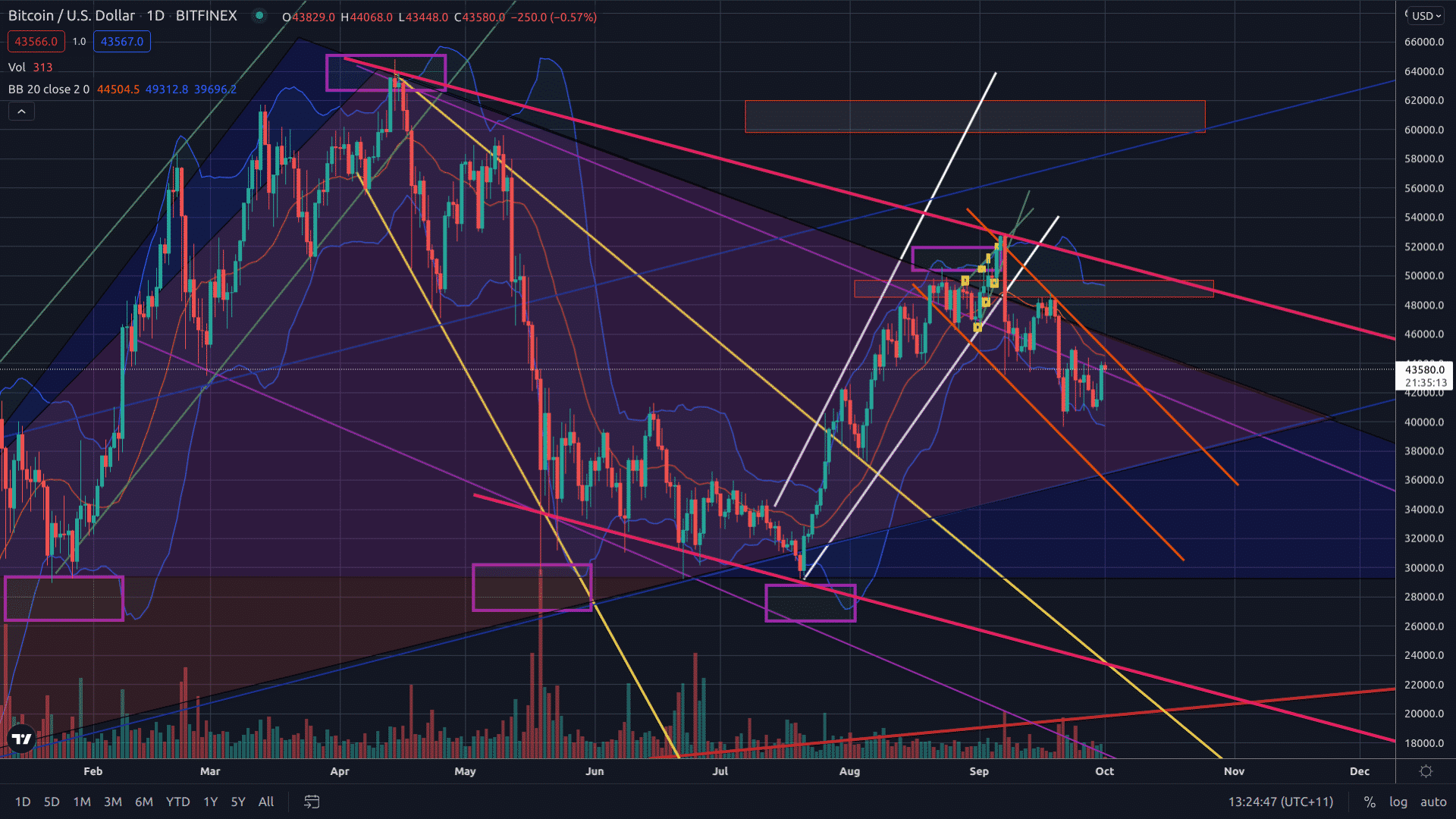 It’s the beginning of the month and another Friday heralding a roller coaster ride in the market. Let’s try to figure out what to expect from digital assets in the next three days!

After reaching the $44,000 level, Bitcoin again found no support from buyers and pulled back lower. At this stage, the drop is not critical, however, in case the bears take advantage of the situation, we could see a collapse to $40,500 or even $36,600. These figures are not random, as they are determined by the recent local lows and by the local support, which is the lower boundary of the orange trading channel.

Generally, the current local dump within the orange trading range is part of a move towards support within the broadening trading channel. Thus, we can conclude that the prolonged decline that began on 7th September is not the most logical, but still a traceable move of the price to the support defined by the white channel. If the fall is not supported by some news, It’s most likely because we are already at the end of the downtrend.

Within the same white broadening channel, should the bulls increase their pressure, we could be headed all the way to $60,000. However, it will not be up to me to decide, but rather the volume ratio in the market.

The worst-case scenario would be a breakout of the white trading range support and a move below it. In that case, the next support is to be expected at around $35,000 to $36,000. However, this move also fits within the triangle formation, which will be broken out by a significant increase in price.

Globally, the current movement is still fully in line with the global bullish picture. In fact, we’re moving within a triangle, with a bullish wedge pattern being one of its important parts. Such declines not only do not contradict it, but rather complement it perfectly because one of the major factors of this formation is the accumulation, which occurs due to the alternating movement of the asset from the upper boundary of the triangle (resistance) to the lower (support) boundary and back in the conditions of a constantly narrowing trading range. That’s why it’s called a triangle, as we refer to a trading channel, but not in its usual sense. Instead of two parallel lines that will never cross, we have channel walls (the same lines) facing each other that move in the same direction until they cross.

The picture for Bitcoin hasn’t changed. In the case of a pullback, we are moving down, looking for one of the key levels from which to bounce off. There are several on our path. The first one is around $45,000. Currently it acts as resistance for us. The second one is $40,000, as it’s an important psychological level. It became the point of support for the purchases, which are now taking place. The third level is a zone near $35 000, acting as support defined by the lower border of the triangle. The fourth point is a range near $30,000, which is the upper boundary of the descending broadening trading channel (yellow). And the last one is $20,000, acting as the lower boundary of the descending purple trading range, a move below which would be a strong signal that crypto winter is coming soon.

There is no growth without a correction. So, you shouldn’t view a drop in any asset as the start of a long fall into the abyss. Sometimes, bulls need to lock in profits too. So that when the price goes lower, they can use the money earned to buy more assets and hold them for as long as the dynamics of currency growth allow them to count on the best.

The denouement is near. There could still be several plunges waiting for us, which fit well within the triangle. However, globally, the way out of this formation will be a Bitcoin pump, the strength of which is likely to push it above all recent major resistances, thereby triggering buying by those who had sold the asset earlier.

We’ve talked a little bit about technical analysis. Now, I propose to recall the facts we have in hand, which are both for and against the subsequent rise. It’s necessary to complete the picture which was formed by the technical analysis. In general, fundamentals, as well as important events and news, are also an important aspect of any analysis. Only those who use both of these analytic tools will be able to get a complete picture of the situation.

To start with, the Federal Reserve of the United States, one of the most ambivalent countries on digital assets, has said it sees no need to ban cryptocurrencies.

The fact that a major world power has decided not to follow the example of another major world power (China) is already a major boon for cryptocurrency enthusiasts. In any case, in the near future, the emergence of “China 2.0” on the world stage, followed by new “miner exodus” and expulsion of crypto business from the country is not threatening us yet. Unless, of course, the Russian authorities suddenly toss in their two cents’ worth.

Meanwhile, the US Securities and Exchange Commission chief Gary Gensler has also brought some positive news to the digital asset market by agreeing to consider ETF applications based on CME Bitcoin futures. Maybe now things will finally pick up and more institutional funds will come to the market.

Yet the debates between American Republicans and Democrats remains a problem. Some want to increase the national debt limit, while others oppose it wholeheartedly. If there’s no consensus between the camps, the US could default and the financial markets could go to hell, dragging with them the ever-responsive digital asset market.

At this point, it’s already a success that the US government has avoided a shutdown. As for the debt limit issue, whether the Republicans want it or not, in the end all they can do in the current situation is to help avoid a default by all means. The politicians will be able to exchange accusations after the situation has been resolved.

Cryptocurrencies are of interest not only to individual enthusiasts, but also to entire global corporations and even states. So, while El Salvador is setting up a volcano powered BTC mining venture, payment giant Visa is building its own Layer 2 solution on Ethereum, which will combine standard digital assets, stablecoins and CBDCs into one common payment channel.

All this shows that times have changed, and that Bitcoin is no longer just a speculative asset. Corporations and even entire countries are now interested in it, which again gives hope of more money flowing into the sector.

And we couldn’t help but notice that today, the first of October, is the start of a new quarter. The fourth and final quarter of the year, which for the most part has been good for Bitcoin. If we look at the trend since 2013, only Q4 2014, 2018 and 2019 ended in collapses. In all other periods, the last quarter of the year was profitable for the market. Hopefully, this year will be no exception.

Ethereum, the second most capitalised cryptocurrency, continues to move in a descending trading channel. At the time of writing, the price of ETH is around $3,000.

Still the same descending channel and still the same bullish triangle that we’ve already looked at in Bitcoin. As of now, the price of the asset still hasn’t set a new local low, which could indicate that the current price “bottom” has been reached and the bulls now have the potential for further gains. The only problem is that both BTC and ETH are still lacking volume from buyers. Glassnote analysts are confident that there are only long-term investors left in the market who will not react to the current collapse in any way, but that still doesn’t mean that there’s no one left to sell assets.

Globally, we’re waiting for the triangle formation to be completed and the following pump to follow. However, this scenario will continue to unfold until the end of this year. Hopefully, the situation will not be complicated by some negative headlines.

The Fear & Greed Index is lagging as usual, reflecting the values valid for yesterday. However, since the last mini-pump, the situation hasn’t changed much yet, so it’s not critical.

The market is stuck in the fear zone and cannot escape from it. Buyers lack the strength to push the price higher, which in most cases, ends in another micro-dump with the indicator going into the “extreme fear” zone.

Many traders and analysts are convinced that it is time to sell short. And they will convince everyone around in every possible way. However, as my rather extensive experience shows, most often such advisors ignore the main principle of any market trading. “Buy low, sell high”. They are simply used to riding on hype coins and strong Bitcoin moves and mistakenly believe that you should only enter a long when the asset is already starting to rise.

However, the most rewarding trades are made precisely when the coin has already fallen hard and is not yet showing signs of growth. This allows the trader to build a medium-term portfolio that will yield good results later.

The top ten altcoins are scattered all over. Cardano (ADA) failed to reclaim its spot on the ranking from Tether (USDT), while Solana (SOL) is starting to show signs of growth.

In fact, altcoins have already performed well. At least by the fact that amid the downtrend of BTC, their losses haven’t been as large as they might have been under other circumstances. Nevertheless, we still have faith and look forward to the alt season. The portfolio is packed.

VeChain is the gainer of the day. This asset has already brought its holders about 12% profit. It’ also noteworthy that globally this coin almost finished forming a triangle and now, at any moment, it could start to fall.

The loser of the day with a 13% loss is dYdX. No wonder. After such a plunge, the coin is now looking for a support.

The market of digital assets is very unstable. Right now, anything can happen. Don’t forget about risk management and don’t neglect your stop-loss orders.