Credefi listing on KuCoin: everything you need to know about the project that bridges the gap between DeFi and TradFi!

As Credefi has just announced its listing on the KuCoin exchange, we invite you to learn more about the details of this promising project which aims to take advantage of the best of both worlds between decentralised finance and traditional finance. 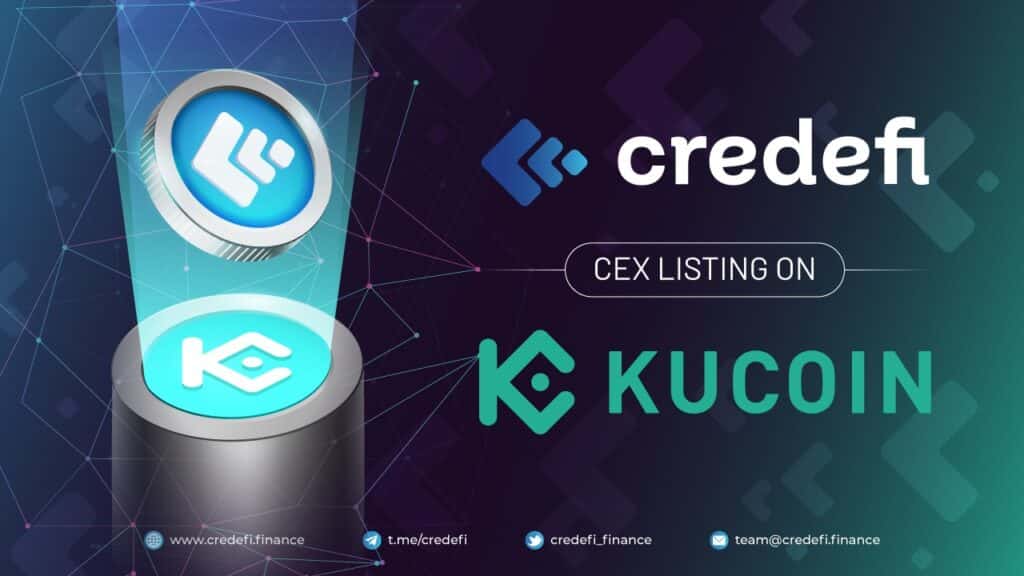 Credefi is an innovative project in the Defi sphere as it connects crypto lenders to borrowers who are small and medium-sized companies in the real economy. It thus responds to a double problem. On the one hand, the DeFi sector is still fragile, with returns evaporating very quickly during a bear market. Speculative borrowers have difficulty in satisfying the entire loan offer of the sector. On the other hand, in the TradFi world, small and medium-sized companies have historically found it difficult to take out loans from large banking institutions without incurring very high interest rates. This has led to these companies turning to alternative means of financing.

The Credefi platform thus makes it possible to offer decentralised and secure loans to medium-sized companies by protecting the lender with a fixed annual interest rate. The objective of the founders is to create a bridge between DeFi and TradFi in order to make it easier for SMEs to take out loans and to offer lenders greater stability.

To successfully bring this added value to the market, Credefi’s experienced team has developed three offers:

An exceptional collaboration with Experian

The Credefi team has surrounded itself with the best. It is the first blockchain project to set up a major partnership with a great player in traditional finance: Experian. The company is one of the three largest credit reporting agencies in the world, with data on more than 1 billion companies worldwide and clients in over 40 countries.

The partnership with Experian will allow to validate and adjust the credit scoring models developed by Credefi on its platform. On the other hand, Credefi and Experian will work together on the open banking protocol – an international initiative aiming at integrating APIs of fintech solutions like Credefi with those of traditional banks. This will allow Credefi to access the traditional banking sector and its huge customer base. An association that will allow Credefi to expand its own customer base and to integrate an ever increasing number of SMEs into DeFi.

On November 17th, on the occasion of the innovation week organised by Experian, the CEO of Credefi had the opportunity to participate as a Keynote speaker in the event alongside major banking players from the traditional finance sector such as Aidexa, Unicredit, Kontomatik andPostBank. A good illustration of the bridge that is being formed between DeFi and TradFi.

Other project partners and key advisors

Beyond Experian, it is a myriad of major partners that Credefi has managed to gather around its project. These include Polygon, Supra Oracles, a cross-chain oracle that bridges the gap between real-world data and data stored on blockchain networks. Lithium Finance, which provides an innovative solution for valuing illiquid real-world assets on the blockchain. The Reef blockchain, built on the Polkadot network to offer a scalable solution with limited transaction costs. Momentum 6, a marketing agency specialising in the crypto sector. WeiChain, a consulting firm specialising in blockchain technologies whose teams have worked for AAVE, Algorand, Harmony, Avalanche and other crypto giants. Armors Labs, a company specialised in the security of blockchain networks, which has notably carried out the security audit of Credefi’s smart contract.

On the side of the advisors of the Credefi project we find names that are not unknown in the crypto sphere. Hristo Piyankov, who has more than 13 years of experience and nearly 50 accompanied projects, realized the tokenomics. Charlie Hu of LucidBlue Ventures. Professor Michael Sung, who has a PhD in Computer Science from MIT and has initiated numerous companies in AI, blockchain and semiconductor sectors. Matthew Land, an engineer by training who contributed to the development of the Ethereum ecosystem and who joined Marshland Capital in 2017. David Marshall, an investor in Bitcoin since 2013, founded Marshland Capital in 2017. Finally, Kenzi Wang, former vice president and general manager of the exchange Huobi Global. He is now a well-known investor in the DeFi sector and NFT projects.

On November 9th Credefi successfully completed its IDO on the Cardstarter platform, an amount of $420 K was raised during this IDO which represented one of the highest number of participants and highest raises completed on Cardstarter!

The next big step in Credefi’s roadmap is the protocols’ listing on the Top 1 centralized exchange for altcoins – KuCoin.

KuCoin is one of the top 5 largest crypto exchanges in the world. Trading volumes are in the billions of dollars on the platform which has developed a pleasant user experience. KuCoin allows access to very promising tokens that are difficult to find on other competing exchanges.

The many staking opportunities with CREDI

Credefi has developed staking opportunities allowing early CREDI holders to receive xCREDI, the governance and profit sharing token of the project at highly preferential rates. xCREDI is a token with a scarce supply and in order to receive it users will have to stake and burn CREDI in Credef’s Security Module – Module X. The xCREDI/CREDI exchange rate is determined based on a bonding curve and with time more CREDI will be needed to mint one xCREDI. To celebrate its early CREDI holders, Credefi is providing them the unique opportunity to receive xCREDI in a 1:1 exchange rate if they stake CREDI from TGE.

Credefi’s tokenomics model is based on two types of tokens which will allow to have, on one side the utility token of the Credefi protocol, the CREDI, and on the other side the governance and profit-sharing token, the xCREDI. The supply of CREDI and xCREDI will be deflationary over time, thus reducing the available supply of xCREDI on the market. More details on the CREDI staking opportunities will be available shortly.

Conclusion: one of the most promising DeFi projects

Since its inception, the Credefi project has demonstrated its full potential. It has been able to bring together renowned partners in the Defi and TradFi sectors. The first rounds of fundraising were very successful, and today the listing on KuCoin is a new step towards the success of Credefi’s ambitions. Namely, to create the bridge between DeFi and TradFi for the benefit of the future of the financial system!