Today is Monday, 27th September, and this is Cointribune’s Crypto analytics. You will learn about everything that’s been going in the market, and also what to expect next in our new article! If you’d like to read the previous instalment, please click the link. Off we go! 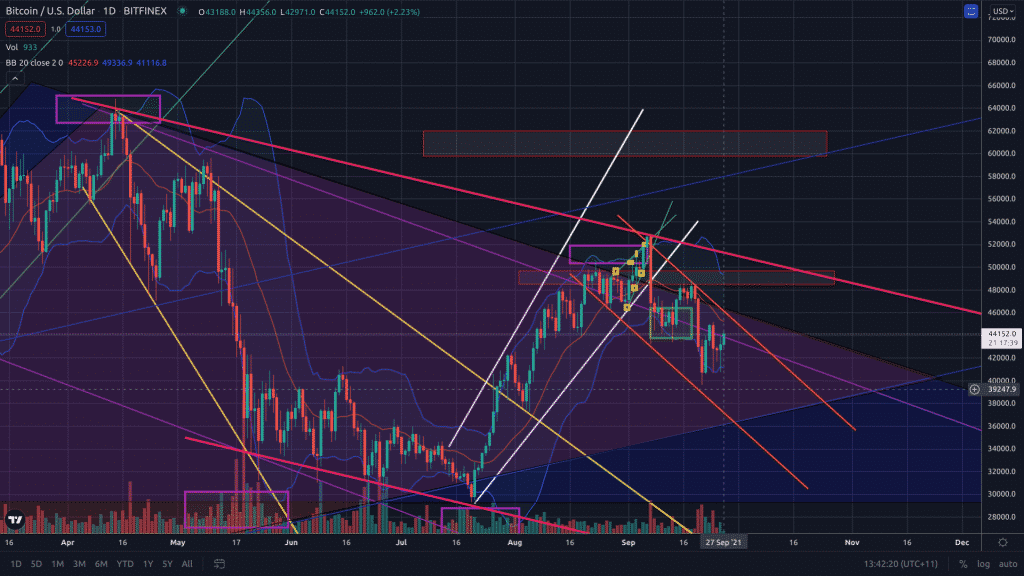 Monday and Sunday have proved to be profitable days for crypto enthusiasts. Not only did Bitcoin stop falling after Bloomberg’s fake news about China’s new crypto sanctions, but also increased in price, reaching the current $44,180 level.

Bitcoin continues to move within the descending trading range, meaning that another dump is still quite probable. However, it will only happen if buyers lack the strength to break out of this trading range, which is also likely to happen in the near future.

The possibility of growth is also based on the fact that the price is moving near the soon-to-be-penetrated top of the wedge. So, now is the time to get your hands on BTC as well as other promising assets.

Gaining a foothold above $44,000 is still an issue. The resistance area near $45,000-$46,000 dictated by the orange descending trading range only makes matters worse.

The bulls are still not strong enough, though. This only suggests that if nothing changes in the near future, we should wait for new, probably rather high-profile news aiming to push people to buy Bitcoin.

Locally, BTC is approaching resistance, which, in case of a lack of both strength and optimistic sentiment in the market, will result in another pullback. At this stage, a fall below $40,000 is unlikely, but we should remember that this probability is still there because the lower border of the triangle, within which the current action unfolds, is the area of $35,000.

Right now, Bitcoin is fighting a bloody battle for every thousand dollars of its price, so even fixing above $44,000 will already be a good push for more optimistic sentiment in the market.

The current movement is still fully in line with the global bullish picture. We are still operating within a triangle whose key element is the “bullish wedge” pattern. One of this pattern’s important features is consolidation (accumulation), which occurs due to the alternating shift of the asset price from the top of the wedge (resistance) to the bottom (support) and back within a constantly narrowing trading range. Actually, that’s why it’s called a wedge: we have a trading range, but not in a usual sense. Instead of two parallel lines that will never intersect, we have two walls (lines) moving in the same direction until they intersect.

Overall, the situation hasn’t changed much for Bitcoin. In case of a rollback, we’ll start going down until one of the key support levels allows us to rebound. The first one is at around $45,000. Right now, it acts as a resistance. The second one is $40,000, an important psychological level. The third level is the zone near $35,000, which acts as a support dictated by the wedge bottom. The fourth point will be around $30,000, the upper limit of the descending trading range (yellow). Finally, the last level of $20,000 acts as the bottom of the descending purple trading range. Going below the last key level may signify the imminent arrival of the crypto winter.

Unfortunately, there is no growth without corrections, so don’t think that an asset’s decline is the beginning of a long fall into the abyss. Sometimes, the bulls also need to lock in a profit. When the price goes lower, you can buy even more assets with the money earned, and keep them as long as the currency’s trends allow you to hope for the best.

Bitcoin’s current fall is just a way to release overheated market tension and redistribute the forces within the wedge. After BTC gains strength, it will continue to climb up and by the end of 2021, it may approach the old, or even set a new ATH.

Ethereum keeps following Bitcoin. As of this writing, the second-largest cryptocurrency by market cap is trading at around $3,120 and is very close to the top of the descending trading range.

If the bulls aren’t strong enough, today may end with another fall for ETH. On the other hand, the last few dumps were important support tests, which may well encourage purchases and send the asset to retest the latest highs.

The fear and greed index has shifted towards fear. Retail investors are still panic-stricken after the last few dumps and are in no hurry to buy new tokens, thinking the market hasn’t hit the bottom yet. At the same time, a new fall in prices is likely to aim the hand at extreme fear, meaning that in the short term, the market still has room for growth, based on purchases and positive news.

Fear is the state of the market when the most profitable purchases are made. Don’t forget about this when adding funds to your wallet. Whales will egg retail investors on, encouraging them to sell and thus lower the prices. Then, these big guys will buy the assets for a song.

When retail investors keep holding their savings, whales carry on shaking the market until they have enough crypto on their hands. So the best thing the average investor can do is not to sell what they have already bought, using each dump as a chance to acquire more assets.

While everyone else is too scared to buy BTC and give up their positions – they will be actively sought after by whales, who’ll later push the market to grow.

The pendulum of the market doesn’t always swing by itself – that’s an open secret. Trading digital assets is a game of tug-of-war, beneficial to both sides of the conflict. And I’m not talking bears and bulls here, rather whales and smaller fish, like you and me.

When the entire market is euphoric and in a buying frenzy, the whales sell.  When everyone is in a hurry to dump their assets and cut their losses, they confidently gain positions. And that’s what’s happening right now. The more afraid retail investors are, the more big guys will buy. Ultimately, when they’ve bought enough, the pendulum of the market will swing again, and we will start buying in our turn, thus increasing the price of the assets owned by the whales.

The market is in recovery, with all the top-10 cryptocurrencies in the green except for Cardano (ADA). That’s mostly because the asset can’t keep up with the other top-10 tokens, but it still continues to grow.

Crypto asset prices have fallen quite a bit. The collapse could have been much worse, though. Now is probably the last opportunity to add new digital assets to your wallet.

New collapses, of course, can’t be ruled out. At the same time, they won’t be crypto winter precursors, but rather whales trying to get more money out of retail investors’ pockets. Try to react to such actions with complete indifference – focus on holding assets as long as possible. In this case, your positions will bring you significant gains.

Perpetual Protocol (PERP) becomes the gainer of the day. This asset has already brought its holders about 60% profits.

Huobi Token (HT) is still the loser of the day. Over the past day, this asset has brought its holders almost 15% losses. In view of China’s new regulation for crypto businesses and private crypto investors, Huobi had to stop registering mainland China residents. So, traders are actively dumping this coin.

The cryptocurrency market has got over the recent collapses and continues to recover. Even if the next ‘breaking news’ story corrects prices, this won’t mean crypto winter is coming. It will be just the whales’ attempt to buy more crypto for the best prices. Don’t rise to the bait!