It’s Monday, 6th September, bringing you another edition of Cointribune’s crypto analysis! Find out about everything that has already happened in the market and what to expect next in our new article! If you want to read the previous issue of the column, please follow the link. Here we go! 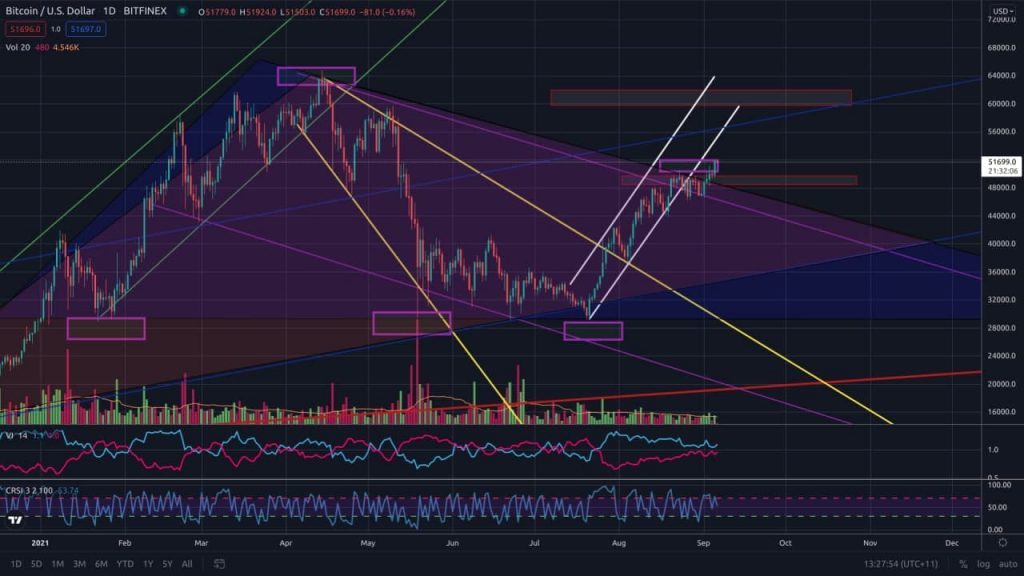 On Sunday BTC made another attempt at breaking through the $50,000 resistance. And it’s been going quite well for the cryptocurrency because BTC is changing hands at around $51,000. The price is $51,772 at the moment of writing. It has also shown a new local high at $51,990.

However, it’s not time to pop the champagne just yet since BTC hasn’t taken proper hold within the trading channel. The next significant resistance is also right around the corner — at $56,000, right above the blue trading range. Unless the cryptocurrency falls back into its struggle with $50,000, it’s possible that bulls will easily push BTC above the said resistance.

Monday started with a minor pullback, which luckily didn’t cause any sell-offs. However, unless buyers start showing more interest in the cryptocurrency’s growth, bears may win over the market again.

This move might be a precursor for Bitcoin’s next major leg up. But the $65,000 global maximum will be the hardest to break above because the psychological pressure is through the roof right now and many may start to have second thoughts.

You may recall that earlier, within the BTC weekly chart (one candle – one week), we noted the formed triangle, confirmed by the descending highs and steady lows at the same level. Within this triangle, we noted a bullish pennant formation, which is one of the patterns indicating a subsequent continuation of price growth.

In case of a breakout, a new round of explosive growth awaits BTC, during which the first cryptocurrency will update its all-time high. Currently, the movement potential suggests reaching such price levels as $90,000 and $100,000.

Within the BTC hourly chart (one candle – one hour), Bitcoin is adhering to an ascending trading channel, constantly showing new local highs and lows.

Sunday was cryptocurrency’s lucky day since it went above the $4,000 resistance level. Unfortunately, it didn’t manage to take proper hold within this trading range. But it doesn’t look like ETH intends to rest on its laurels and will continue to work on climbing higher. The chart suggest that the cryptocurrency will attempt to reach the next resistance zone of $4,200.

It is worth mentioning that analysts remain optimistic and predict ETH to reach $10,000 by the end of the year.

Bitcoin’s charts have again triggered traders’ greed. We are currently facing extreme greed, meaning people are optimistic like never before. We expect that bears will take a few steps back at least until we see the next resistance level.

However, it’s not the time to just sit back and relax. Cryptocurrencies are extremely volatile, so traders should always expect for the other shoe to drop, that is, a sudden bear attack that would turn the market red.

Top 10 altcoins are following Bitcoin’s lead. However, Solana (SOL) is an exception and continues to stagnate. It means that traders should pay close attention to the most discussed altcoin in recent weeks —  Dogecoin (DOGE) may take over once again.

This week’s gainer is Quant. It’s also the new on the block — the altcoin has been on the market for less than a month. However, we are seeing great results with a 100% growth in the past week.

At the moment QNT is changing hands at $383 dollars.

The loser of the day, among the top 100 cryptocurrencies according to CoinMarketCap, is Revain. Within a few hours from the beginning of the day, this asset has already lost more than 8% of its price, even though it hasn’t left its trading channel.

However, REV holders must keep their composure.

Don’t forget about risk management and don’t neglect stop-loss orders. Only by staying disciplined will your trading bag grow steadily, protected from the uncertainties of the market.