Alright, let’s talk about today’s state of the market. Don’t forget to check out our crypto market analysis from yesterday for more context. 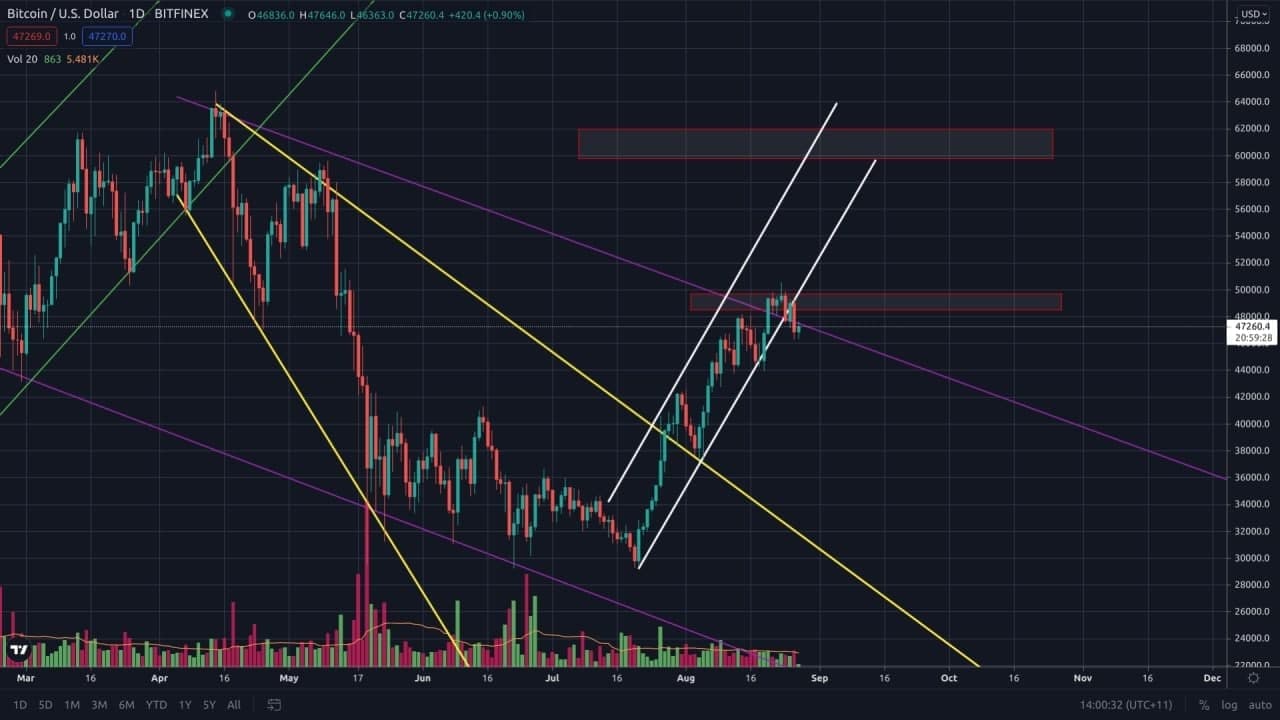 Bitcoin continues its unnerving adventure down. Bears have been quite literally crushing bulls; and the latter are certainly taking too much time to try and change the situation.

At the moment of writing BTC is changing hands at around $48,000 but we still expect it to fall below $47,000 with major sell-offs. If the cryptocurrency breaks the $45,000 psychological support level, the next stop is around $40,000.

Unless major corporations try to revive Bitcoin by investing large sums of money, it will continue to decline. Although many buyers are still trying to win this fight, others quit since Bitcoin just won’t get out of the descending channel (purple).

Without any significant events in the crypto world, the currency doesn’t seem to find the strength to go past $50,000 no matter what. And it doesn’t look like we have any good news coming, even MicroStrategy’s investment didn’t help. Maybe it’s time to call Elon Musk?

Ethereum is following Bitcoin’s lead. There are two similar highs — a double top, if you will. A double top is an extremely bearish technical reversal pattern that forms after an asset reaches a high price two consecutive times with a moderate decline between the two highs. It is confirmed once the asset’s price falls below a support level equal to the low between the two prior highs. So, there it is, people, a clear sign of future bearish movement…

…as well as a sign of bulls possibly just taking their time to regroup and pump up the asset again.

Should ETH fall below $3,000, you must only start buying when it tumbles down all the way to $2,500. In case you can short the asset, use this opportunity to its full potential.

However, don’t forget to check how Bitcoin is doing when you’re dealing with altcoins, since every little change of its pace will influence other cryptocurrencies too.

Since bears are currently extending their influence all over the market, it’s no wonder people are changing gears left and right. Our main advice is to always check the market’s mood when trading.

Top-10 altcoins losses look depressing. Sure, they didn’t lose that much in volume; however, if we remember how altcoins are affected by Bitcoin, the depression becomes justified. One might ask, so what? The market is at a discount!

But there’s a huge possibility that you’ll just have to sell even cheaper.

However, there is one altcoin currently defying the trend.

According to CoinMarketCap, Solana is the winning gainer today, though it might be too late to buy the asset since its price has already reached its resistance (green) twice today. Another “not to buy” sign is the pattern that altcoin follows. The white triangle clearly indicates that SOL will fall to its $50-$60 support level before the next surge.

NEAR was the biggest loser, declining 12% during the day.

But the altcoin’s situation is not as bad as one might expect it to be because it hasn’t left the ascending channel (white). Halfway to its support level, NEAR will likely surge again. The pattern we see points at the possibility of this very scenario.

Bitcoin’s downfall has heavily influenced other cryptocurrencies. Margin trading doesn’t look attractive at the moment since every Bitcoin’s move will have a ripple effect across most of your positions. Don’t forget to set stop-loss orders!