NFT of the Day: Thee Kuttichathan Thira by Arun Hegden

Today is 13th September, and here’s another part of CoinTribune’s NFT of the Day series with more not-too-trendy but deep and probably underestimated digital artworks that are fortunate enough to have taken the form of non-fungible tokens. If you’d like to see what NFT was featured in the previous instalment, click here. Here we go! 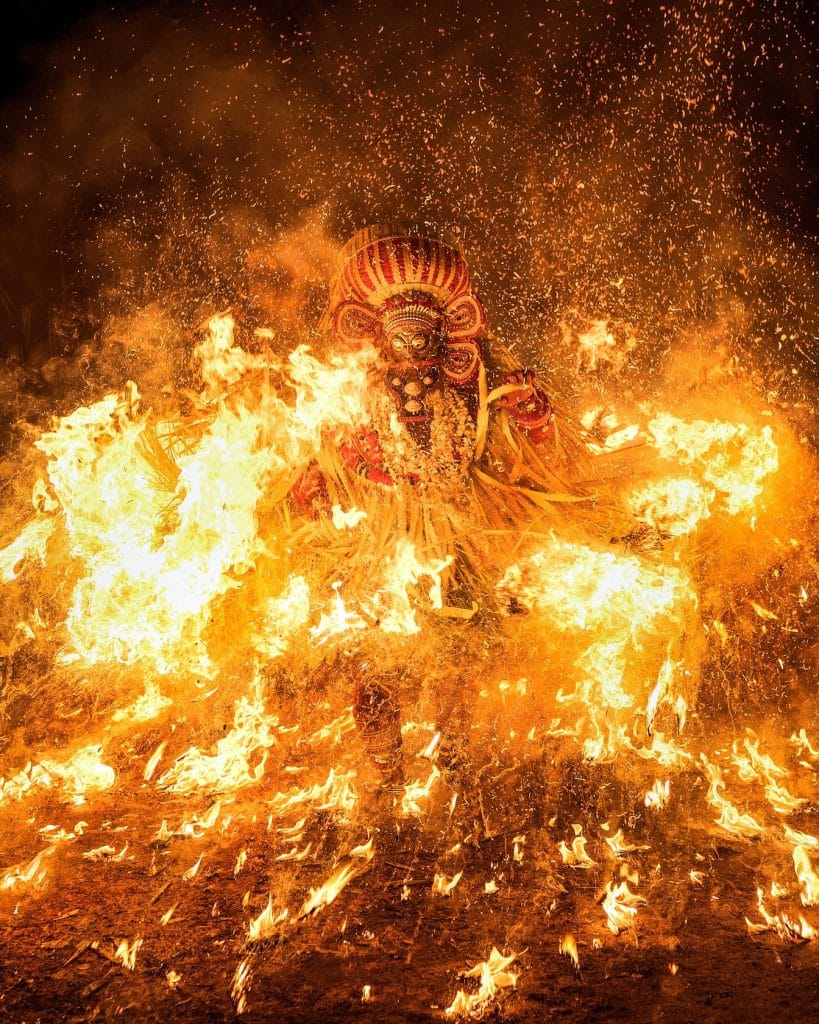 Forces of nature in art

There are three things you can watch forever: fire burning, water flowing, and other people working. No, of course not, this isn’t about promoting laziness. It’s just that remembering the creations that we have reviewed over the last couple of weeks, we couldn’t help but think about the role and the images of natural phenomena, both in the works of NFT authors and in art in general.

Usually, when it comes to creativity, an element is seen as an unrelenting force, wild and unbridled. Humanity may have tamed fire, learnt to generate electricity, use streams of water, and gusts of wind for personal purposes, still people possess only a tiny fraction of the power that is inherent in the abovementioned natural phenomena. Who knows, maybe that’s for the best.

But let’s get back to the elements.

We already covered the beauty and the impressive power of lightning in the article about “The Gates of Venezuela”. We also talked about the irresistible power of the ocean while peering at the breathtaking scenery in “The wave and the giant”. Each of these NFTs explores the theme of elements that, being purely natural phenomena, are intolerant to any form of control, and are capable of obliterating anything that stands in their way. But what if we imagined the kind of picture where a person and an element would clash on equal terms?

Today, we’d like to share with you an NFT from the Foundation user Arun Hegden called “Thee Kuttichathan Thira”.

Thee Kuttichathan Thira (Guardian of Fire) is a photograph taken in India during a performance by an artist taking the role of a mythical entity that commands fire.

The picture is quite literally ablaze with energy. In it, we see a violent yet harmonious interplay of human and flame, depicted through the lens of ambiguity: you can’t really tell if the relationship between the character and the all-consuming flame is one of harmony, or what you’re witnessing is a fierce struggle.

Even though both the character and the element in this photo seem to form a captivating visual unison, you can still feel that behind the scenes this apparent harmony is nothing more than a disguise trying to conceal the never-ending struggle between the two. The characters are mercilessly testing each other’s strengths and trying to expose each other’s weaknesses, and the outcome of this fight could easily be the end of one or the other.

The hypnotising beauty of the shot and the intolerant, all-consuming heat of the fire are balanced with the confidence and composure of the person who tames it. A truly mind-bending sight.

This NFT conveys a sense of overwhelming power of flame juxtaposed with the power of unbending will. Each step of the character captured here is filled with confidence, complemented by the grace of the tongues of the flame tongues trying to swallow everything around itself.

What does it make you feel? Share your thoughts on Cointribune social media!

And, of course, be sure to share your creations if you’re an artist. We’ll be ever so happy to help you get your works around.