Cardano (ADA) and 'Blockchain for Good' winning over Africa

Cardano was already making strong progress in Africa’s humanitarian sector. Now, after announcing a second partnership with the NGO Save the Children in Rwanda, the company is further strengthening its position at the heart of the humanitarian ecosystem, as well as the credibility of its ADA cryptocurrency. In countries with underdeveloped banking sectors, the blockchain and cryptocurrencies are an unrivalled method for granting citizens access to essential services, without any limits and on a decentralised network. This is where Cardano enters the picture, one of the world’s biggest blockchains set up in Africa to help it change for the better. Cardano also plays an important role in humanitarian projects and the mass adoption of the Blockchain for Good movement, something that we at CoinTribune follow with a keen interest. So, let us take a look at the Cardano ecosystem and its successes in Africa! 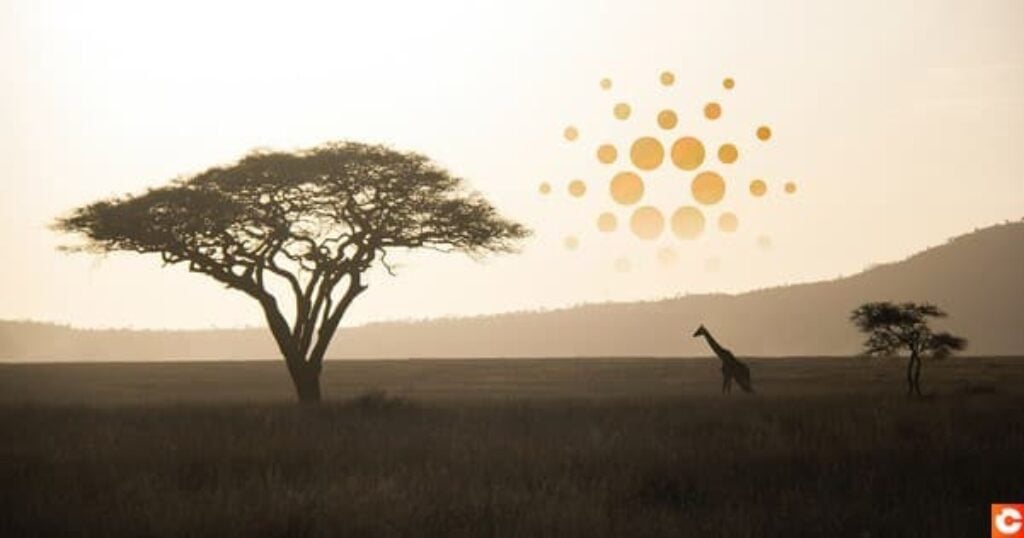 Cardano: from blockchain to humanitarian initiatives

For the uninitiated in all things, or for those who need a quick memory refresh, we will begin with a bit of background about the Cardano project. Alternatively, read our ultimate guide on Cardano.

Cardano is an open-source blockchain created by Charles Hoskinson, one of Ethereum’s (ETH) co-founders. His new project first saw the light of day after an Initial Coin Offering (ICO) of $62 million (~£44 million). The ADA cryptocurrency was launched in 2017, almost immediately being viewed as one of Ethereum’s rivals. Although ADA is less widely known and traded considerably less than Ethereum, the project has avid support thanks to its creator, who is well respected within the crypto community.

After the headline cryptocurrencies we all know, ADA features among the top six with the highest market capitalisations. Its aim is to become a part of the third generation of cryptocurrencies, correcting the other cryptocurrency’s limitations in the process, such as slow speeds, inflexibility or even a lack of innovation. To achieve this, Cardano uses proof of participation, more commonly known as proof-of-stake (PoS).

In March 2020, ADA hit rock bottom with a market price of $0.019 (~£0.013). However, a series of strong performances followed, as demonstrated by the graph above. Just a few days ago, it was trading at $1.40 (~£0.99) with further price rises anticipated, even if the current state of the cryptocurrency ecosystem suggests that it might yet suffer some additional corrections.

However, Cardano’s founder has not limited himself to creating a currency. In 2017, Hoskinson also created Input Output Hong Kong (IOHK), a blockchain engineering company. It was started to ensure Cardano’s continued development, and in particular, to aid its deployment in Africa through ready-to-use turnkey solutions. Finally, after the blockchain protocol and the ADA cryptocurrency, the Cardano project then created a foundation to support its development in the collaborative economy and the humanitarian sector. With this brief introduction to Cardano over, we will now move on to discuss the grounding principles of the new foundation and its flagship projects in Africa, all for the best possible causes.

Thanks to its decentralisation, the blockchain and cryptocurrencies are already helping to contribute to good causes, such as is the case with Tech For Good. Meanwhile, Cardano and its foundation serve as a confirmation of how the partnership between technology and charity is a perfect way to have a positive impact on the world.

The blockchain has far more to offer than solely cryptocurrencies. Despite this being the most well-known and widespread use at present, there are many different ways to use it, and each of them provides a useful service. Decentralisation and transaction consensus are both excellent examples. In particular, these facilitate smart contracts in addition to non-fungible tokens (NFTs).

Thanks to the blockchain, it is also possible to store documents on a decentralised network. The shared consensus mechanisms and the ability to recover digital documents offer a safeguard against forgeries.

In short, it is safe to say that blockchain technology provides genuine advantages to different companies and organisations around the world. It can also be used for humanitarian purposes, such as strengthening infrastructure in developing countries, which is precisely what Cardano and other institutions are attempting to do.

After having developed one of the most important blockchain and cryptocurrency networks, Cardano intends to bring its technology to the whole world, or in this case, to humanitarian organisations operating in the African continent. At present, various charitable initiatives are supported by the Cardano Foundation.

Let us take a detailed look at Cardano’s involvement. In various countries in the world, especially on the African continent, it is nearly impossible for individuals to guarantee the fulfilment of contracts due to problems with corruption or financial defaults within the different countries’ political systems.

This is where the blockchain comes into a world of its own. It does not rely on any state or governmental power, and it is also able to operate around national borders, all via a decentralised system. In theory, anyone in the world with an internet connection can use the blockchain.

Cardano fully understands this, but it has also gone a stage further.

Ethiopia is one of the first countries where Cardano was able to successfully implement a blockchain network. As a result, five million students (3,500 schools, five million students and 750,000 teachers) received an identity document stored on the blockchain. On the one hand, it will allow them to record their educational attainment, but it will also provide them with a non-falsifiable identity document.

“We believe that the blockchain offers a key opportunity to end digital exclusion and widen access to higher education and employment.”

This use of the blockchain will resolve the problem of fake diplomas, a serious issue in Ethiopia, and open the doors for prospective students to pursue further education inside and outside the country.

At the end of March 2021, the Cardano Foundation announced that it had delegated more than $500 million (~£353 million) for community-led humanitarian projects on the Cardano network. This quickly made it one of the largest decentralised donation platforms in the world, a demonstration of one of the undeniable benefits of cryptocurrencies and the blockchain, and their positive impact upon an entire continent.

After the announcement, $270 million (~£191 million) in additional donations were delegated to humanitarian projects. Charitable organisations, such as Save the Children, are set to become some of the main beneficiaries of this initiative. Here, the Cardano Foundation is playing a leading influential role among NGOs while continuing its work of agreeing new partnerships. At the same time, it is promoting the use of the ADA cryptocurrency and Cardano’s integration within the social-good ecosystem.

Nothing courts controversy quite as much as the topic of the blockchain and cryptocurrencies, at least among the small number of people who actually know what they are talking about. The example set by the Cardano Foundation and other initiatives in the humanitarian sector are yet more proof, were it necessary, that the blockchain is more than just digital currency: it has the potential to change the world.

A humanitarian alliance with Save the Children

In a press release at the end of April 2021, the Cardano Foundation announced another partnership, this time with NGO Save the Children. Together, they will explore the potential uses for Cardano and its ADA cryptocurrency to help support humanitarian initiatives in East Africa. The news came during the IOHK Africa conference, where it was revealed that Save the Children will soon add a payment gateway allowing it to receive payments in ADA.

Meanwhile, the Cardano Foundation, or the not-for-profit branch of the Cardano parent company, will study where and how its blockchain technology could assist Save the Children’s missions, especially those linked with its Kumwe Hub in Rwanda and the associated NGOs.

“We are excited about the great interest from charitable organisations to explore using Cardano and ADA in their donation model. Save the Children is the first official non-profit organisation to do so, and we warmly welcome them to our ecosystem. Integrations and collaborations such as these are crucial if we are to pave the way for mass adoption of blockchain technology in the future, one of the mandates of the Cardano Foundation and a vision for our entire ecosystem.”

The Kumwe Hub, which means “together” in Kinyarwanda, is an impact innovation hub that allows Save the Children to engage more effectively with technology and business sectors in the region. It increases the NGOs’ impact on the lives of children and families in the areas of education, health and security.

The integration of the blockchain into Save the Children’s system, made possible by the COTI-developed AdaPay gateway, is a major step forward. It is the first time that an international non-profit organisation will be able to receive and store donations in ADA without having to first convert them into fiat currency. This is a significant development for the future of ADA as a fully functioning cryptocurrency.

You can already support this initiative by making a donation on the Save the Children’s AdaPay gateway, via an ADA token. All told, this latest advance serves to validate the positive reviews and future growth prospects of Cardano and its ADA cryptocurrency, which are significantly benefitting from the explosion of the blockchain on the African continent. In turn, this boosts Cardano’s popularity and its importance on the cryptocurrency markets.

Cardano is making no secret of its bold growth plans in Africa or its desire to become the driving force behind the continent’s decentralised digitalisation. However, many challenges are still to be faced. The first requires them to build solid partnerships with local actors; another will be to train developers in the region so they can effectively respond to the continent’s blockchain needs. Whatever happens, all eyes will be on Cardano, Save the Children and Africa!