In 2021, worldwide art masterpieces get a new life with the help of the rapidly evolving NFT market. The Russian Hermitage, the world’s second-largest art museum, has contributed to the cause by selling digital copies of several works of art in the form of non-fungible tokens (NFT). The auction, held in partnership with the largest cryptocurrency exchange Binance, ran from 31st August to 7th September. 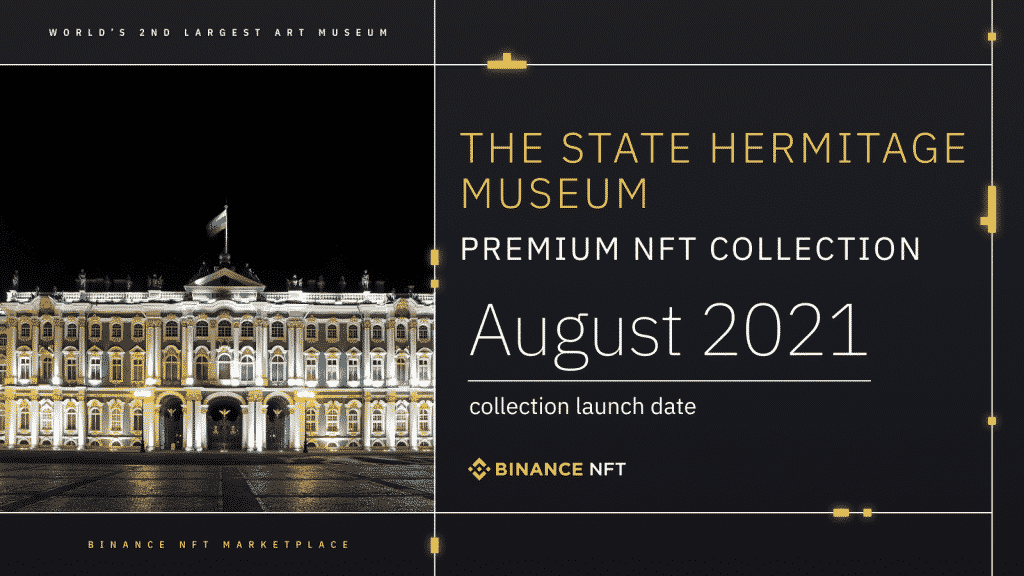 The Hermitage explores the potential of NFT

The oldest museum of St. Petersburg has recently entered new pastures. The management of the Hermitage decided to start selling famous paintings as NFTs. The main reason, as explained by the organisers, was neither financial gain nor advertisement, but feeling the ground for the future NFT potential as well as gaining a reputation in the field. The first series of tokens issued by the Hermitage was intended primarily for collectors.

This March, the Hermitage held the first exhibition of NFT art in Russia with The Aksenov Family Foundation as a strategic partner. The exhibition was held as part of the Hermitage 2021 project and was part of the museum’s exploration of new forms of art. “Non-fungible tokens have become the embodiment of innovations in securing the right to a work of art using blockchain technology, which allows you to establish unambiguous control over copyright and proprietary rights,” the museum commented.

As part of the Your Token is Kept in the Hermitage project, the museum released a limited edition of NFTs with digital copies of the world’s renowned masterpieces from its collection. The latest auction featured five iconic works, with the most expensive one, Madonna Litta by Leonardo da Vinci, selling for more than $150,000 (~£109,000).

All the tokenised digital works were created as two copies. One copy was stored in the Hermitage, while the other one was presented on the Binance NFT marketplace. All the digital copies were personally signed by the Director of the State Hermitage Museum Mikhail Piotrovsky.

During the auction, all the NFT masterpieces presented by the museum were sold.

BUSD is a regulated stablecoin backed by fiat and pegged to the US dollar. There is one reserve US dollar for every BUSD unit.

A word form the organisers

The total cost of the works sold was 444,500 BUSD (~£321,235). All of the funds went to the museum. According to the CEO of Binance, it is important that traditional museums around the world support new trends and endeavour to popularise art in new formats.

“We are not going to solve financial issues with the aid of tokens alone, we have no market expectations related to them. We just want to see how this new format will be received. NFT is a philosophy, a brand-new aesthetic of possession. Digital copies of works of art overflow the Internet where everyone has access to them, but NFT commands a sense of actual ownership, and in our case, a sense of belonging to a great museum, too,” the Director of the Hermitage emphasized.

However, not everything goes in the art industry. Recently, the Hermitage NFTs have led to a high-profile conflict with Till Lindemann, front singer of Rammstein. Till used photographs of the interiors of the Hermitage taken without permission to create NFT art for sale. By doing this, he violated the terms of the contract, according to which the footage could not be used for other purposes than working on the music video for the band’s new song.