TikTok has announced the release of its official NFT collection. The drop will feature media from various content creators, including popular artists Lil Nas X and Grimes. The collection will be sold under the name TikTok Top Moments. The first NFTs will go on sale on 6th October. 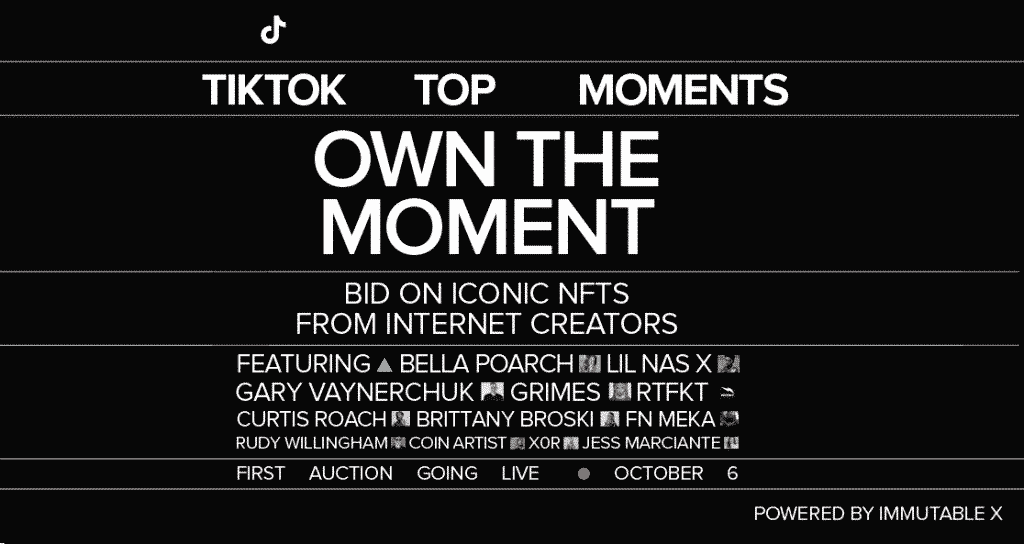 TikTok is getting ready to launch its own NFT collection. TikTok Top Moments NFT lineup will be featuring content from huge TikTok members.

The first NFT will hit the market on 6th October. It would be a Rudy Willingham’s stop-motion video for the song “Montero” by rapper Lil Nas X.

Cryptobriefing.com reports that further NFTs will include content from TikTok stars such as Bella Poarch, Curtis Roach, Brittany Broski, FNMeka, Jess Marciante and Gary Vaynerchuk. Grimes, COIN ARTIST, x0r, RTFKT and other big names will also be collaborating with TikTok for its NFT collection.

TikTok’s head of global marketing, Nick Tran, explains that the NFT launch is happening as the platform wanted to let its “fans own a moment on TikTok that helped shape the internet while supporting some of their favourite creators.”

Tran added that TikTok is “excited to see how [communities] engage with some of the internet’s most beloved cultural milestones.”

The NFTs will be disposed on the Ethereum blockchain and will run on Immutable X, a Tier 2 scaling solution.

TikTok plans to drop NFTs weekly until the end of the month; later, NFTs can be minted and traded for zero transaction fees (for example, gas costs).

The platform states that the revenue will “largely go directly to the creators and NFT artists,” although it’s likely that the service will also make some good profit.

TikTok is not the first social media platform to introduce an official lineup of non-fungible tokens. In June, Twitter released a collection of 140 free NFTs, which later were sold on secondary markets. Around the same time, Reddit introduced its own NFT line CryptoSnoos. Meanwhile, Facebook is reportedly going to support NFT transactions in its Novi wallet. There is no sign that the network will launch its own NFT lineup though.