Vitalik Buterin, Ethereum’s creator, is said to have taken inspiration from the pioneering cryptocurrency, Bitcoin, but had a huge ambition: to change the world. How did he propose to do this? By providing developers with the possibility of building decentralised applications on the Ethereum network. Let’s have a look at the peculiarities of Ethereum, its history and how it works. 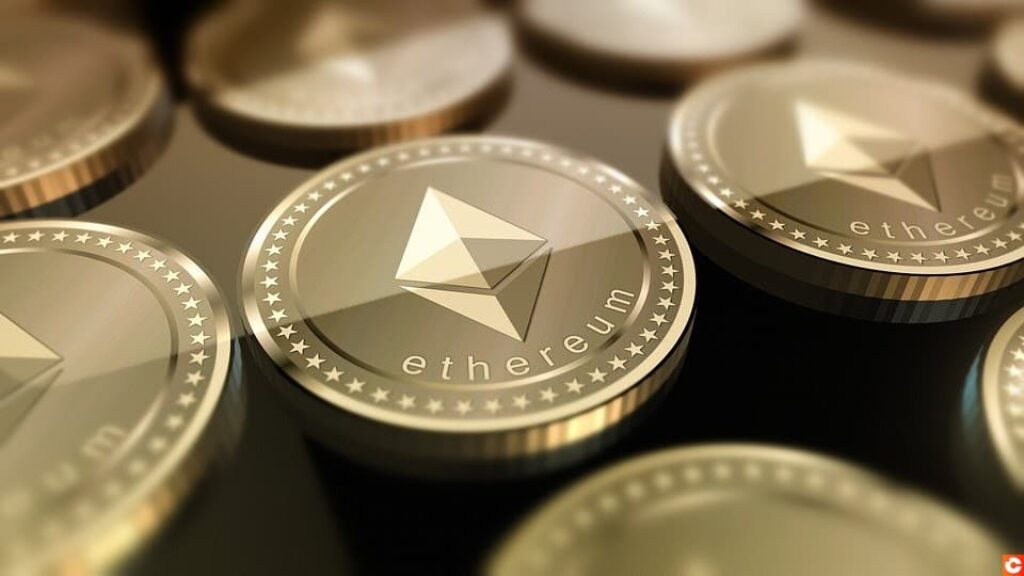 Ethereum is a network of open and decentralised blockchains that also runs a cryptocurrency: ether (ETH).

Cryptocurrencies are electronic currencies that allow transactions to be carried out through cryptographic validation. They are decentralised because they are not fiduciary (fiat) currency (coins or notes issued and backed by central banks) and payments cannot be made by debit, credit card or cheques.

A cryptocurrency is therefore an alternative currency that is not currently legal tender. It is not regulated by any central body or financial institution, meaning its price is not indexed to a conventional currency or to gold.

Nevertheless, cryptocurrencies can be traded on dedicated online platforms, or even provide cash flow for those who validate operations as network nodes. These alternative currencies work according to several principles:

The security and transparency of cryptocurrencies are guaranteed by a fundamental technology: the blockchain. The blockchain is a gigantic digital library that acts as an indelible and inviolable database. It ensures the authenticity of transactions through traceability controlled by its network. These miners, who are rewarded in cryptocurrency, provide the equipment in the form of computing power and storage.

A cryptographic process encrypts each block, this code being associated with the code which precedes it in the chain. The result: if one block is changed, a chain reaction occurs, affecting the whole ‘chain of blocks’. The other security mechanism is its decentralised architecture, which duplicates all the blocks on each node that participates on the network, avoiding the risk of losing the blockchain’s entire data.

The blockchain is a revolutionary system because it makes it possible to regulate what is not centralised. In fact, Ethereum promotes dApps (decentralised applications).

Good to know: there are public blockchains like Ethereum and private blockchains like Libra, proposed by Facebook, among others. The difference being that one is open to the public, the other has limited access.

Where does Ethereum come into all of this?

Ethereum’s history and how it works

The Ethereum project consists of creating a network of blockchains in order to provide developers with a platform to build decentralised applications.

The history of Ethereum begins in 2013, when Vitalik Buterin published a white paper on the subject. The following year, the University of Waterloo student decided to devote himself fully to his project. Working alongside Gavin Wood, he was awarded the Thiel scholarship worth $100,000.

The commissioning of the Ethereum platform took place in 2015, the year in which the foundations of the project were established. At around the same time, several companies (BP, Intel, Microsoft) joined the project, united under the Enterprise Ethereum Alliance (EEA) entity. Several changes were also made to improve the platform, like enhancing its security and efficiency.

Did you know? The initial block of Ethereum is called the genesis block (like Bitcoin’s) and it was launched on 30th July 2015. 60 million ethers went on presale and 12 million were reserved for developers.

In 2016, Ethereum developers had a hard fork (creation of new software from source code), following an attack targeting the ether funds belonging to the DAO (Decentralised Autonomous Organisation). The hackers ended up embezzling 5% of the total amount of ether in circulation. The hard fork occurred because it essentially stopped the theft and saved the ethers from being stolen. However, part of the Ethereum community disapproved of this choice, leading to the splitting of the blockchain: Ethereum remained with its ETH official currency and Ethereum Classic and ETC the ‘spin off’ (those who disagreed with the solution).

What are the principles of Ethereum?

The main idea of ​​the founders of cryptocurrency is not to make speculators rich, but to change how transactions work around the world. While Bitcoin initially aimed to decentralise currency, Ethereum wanted to broaden its scope.

Moreover, the 2013 white paper lists the possible examples of application:

Currently, the dApps built are open source, secure, autonomous, always available and easy to implement. Therefore, all applications on the Ethereum network share its blockchain.

Where and how to buy Ethereum?

There are several ways to buy ether. Some of the quickest, cheapest and best ways to buy are here in our ultimate guide to buying ether.

Why invest in Ethereum?

Investing in Ethereum is no different from investing in any other cryptocurrency.  However, its rapid growth is attracting attention.

The benefits of buying Ethereum

Ethereum is one of the three most popular cryptocurrencies on the market and is used for many transactions. Ether has also been adopted by international institutions and multinational firms which back up its real world practicality.

Good to know: Since 2018, the EEA has more than 200 members who are active in promoting cryptocurrency.

In the long term, investing in Ethereum is interesting because the blockchain network holds more promise for developers than Bitcoin, for example. Written in full-Turing code, the Ethereum blockchain displays much faster transaction processing times compared to Bitcoin (12 seconds vs 20 minutes). The technology guarantees problem solving with maximum precision, which is unrivalled on the market.

Unlike Bitcoin, Ethereum is not a threat to banks and financial institutions, but a source of opportunity. These international players, burned by the idea that the value chain of transactions is slipping away from them, could take advantage of the Ethereum blockchain to accelerate their services, thanks to its innovative smart contracts.

Good to know: Bank of America has teamed up with Microsoft to create an application on the Ethereum network that secures their customers’ transactions.

The risks of buying ETH

The value of ETH clearly depends on supply and demand, which means you should respect the basic principles of how markets work. Like other cryptocurrencies, ether is subject to great price volatility. The reasons behind this are that the industry is still immature, there is still a lot of ground to be explored and there is relatively little liquidity in the crypto markets.

The biggest risk in investing in Ethereum is the loss of start-up capital. In order to limit these risks, make sure you invest responsibly:

By being aware of these common-sense tips, buying Ethereum may seem much less risky than investing in the thousands of other virtual currencies, which do not at all come with the same guarantees. Through its short history, its institutional recognition and the prospects it offers, Ethereum has established itself as a serious competitor to Bitcoin, especially as its ambition to change the world is still intact.