After Bitcoin (BTC), Vow promises to be the future of money

It’s been more than a decade now since Bitcoin (BTC) created a whole new monetary ecosystem; one that is decentralised and not controlled by a central government entity. The Bitcoin revolution is exciting to follow, but we must accept the fact that BTC is still rarely used for commercial transactions; this being due to its low transaction speed and high volatility in particular. Today, we would like to present Vow, which, thanks to its innovative dual token concept, looks to democratise the concept of cryptocurrency. What’s more, it will do all this while providing significant added value to merchants and their customers worldwide by offering a tokenisation solution for their existing rewards and discount programmes. 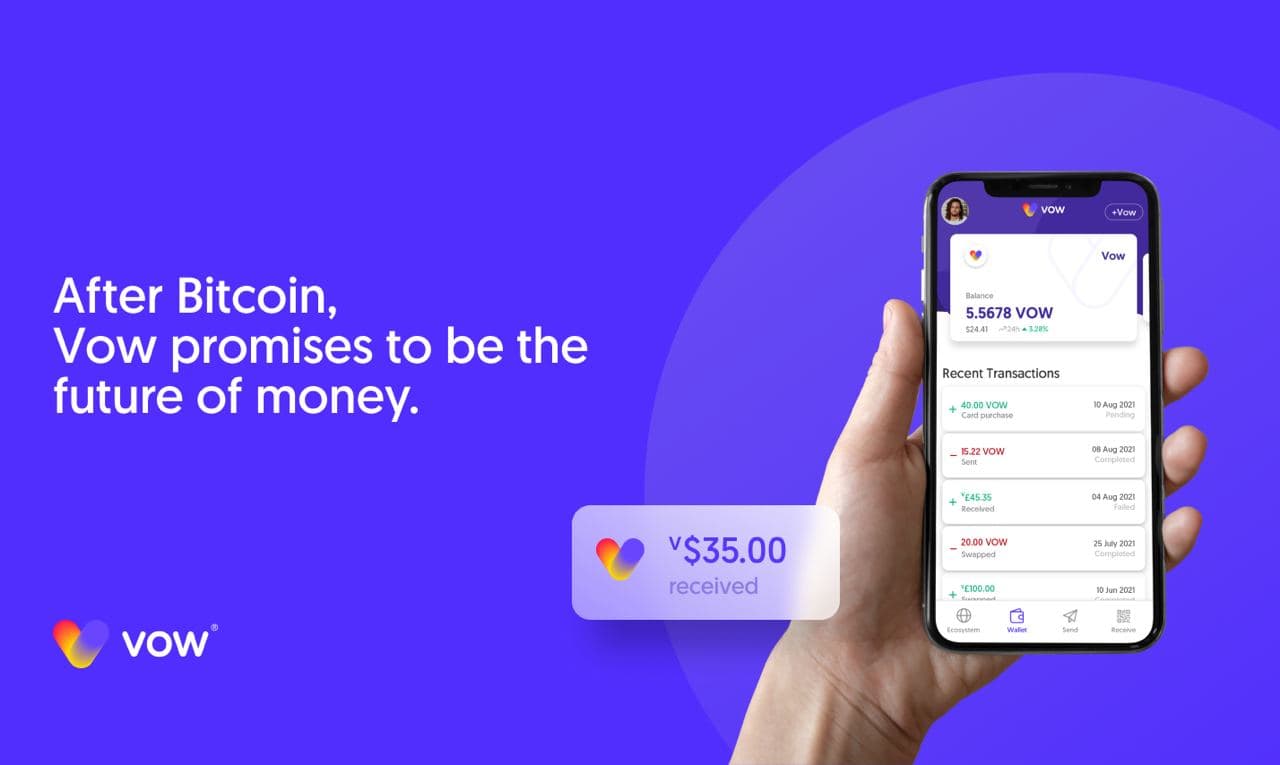 Vow: the promise of a decentralised global currency

What better way to dive into Vow than to reflect for a moment on the name of the project. The name was not chosen at random by the team, quite the contrary. As you know, a vow is a type of promise; but not just any old promise, since we are talking about monetary fundamentals here. The value of a currency is intrinsically based on the promise that it will be accepted in all physical or online shops, allowing you to buy goods or services. For this reason, Vow and its V-shaped logo refer to the promise of universal acceptance of “Vow currencies”.

Vow is based around two types of tokens, as explained in the introduction. On the one hand, Vow currencies are stable tokens that represent the value of any local currency 1:1. For example, there is the Vow dollar, the Vow pound and so on. On the other hand, unlike stablecoins on the market such as Tether (USDT), there is no central entity that guarantees the stability of these tokens. With Vow currencies, it is the promise of acceptance of these tokens by the merchants in the network that guarantees their stability and value. A decentralised backstop, if you will.

All the same, the Vow token is a floating price token created on the Ethereum ERC 777 standard, which plays an important role in securing the value of each Vow currency. We will come back to this later.

Vow currency: how does it work, exactly?

The project is based on the following premise: each year, the market for rewards offered by merchants to their customers represents $2 trillion worldwide. These rewards take different forms, whether vouchers, loyalty points, cashback or gift cards. Vow makes it possible to tokenise these programmes thanks to the Vow currency mentioned above.

Here’s how it works:

By choosing to distribute cashback in the form of a Vow currency, partner merchants collect the entire sum of the purchase made by the customer, so they benefit from additional cash without a reduction by the percentage of cashback offered to the customer. In exchange for this benefit, the merchant will have to accept payments made in Vow currency by other customers: a promise of acceptance of Vow currency proportional to the volume issued as cashback.

The more the network of merchants accepting Vow currency develops around the world, the more Vow becomes a new form of currency based on its universal acceptance as a way of acquiring goods and services, and the more it becomes decentralised, because each merchant becomes a potential distributor and acceptor of Vow currency.

In order to join the Vow network and issue cashback in Vow currency to their customers, merchants must get in touch with the validators of the network. These validators are responsible for validating the issuance of Vow currency when a purchase is made. These are companies whose business operates cashback services, rewards or a loyalty programme, and who have decided to join the Vow ecosystem. These validators ensure that the vcurrencies are issued following the completion of a financial transaction corresponding to a purchase from the merchant.

A closer look at the VOW token

The VOW token complements the different Vow currencies. It is a token whose price will fluctuate, unlike the stable Vow currencies, which are pegged to the local fiat currencies of the merchants who issue them. In terms of tokenomics, the initial offer of VOW tokens will be 1,142,857,142.

VOW tokens guarantee Vow currencies issued by merchants through a staking system. In order to issue Vow currency tokens to give cashback to their customers, merchants must lock up a number of VOW equivalent to one-fifth of the value of the tokens issued.

Once again, let’s take an example to better understand. An American merchant wants to offer $1,000 of cashback in Vow currency to his customers. He must therefore stake $200 of VOW tokens. Once staked, the merchant can distribute the Vow currency to his or her customers in line with the company cashback programme. These conditions are then validated and checked by the validators of the network.

The staked VOW makes it possible to secure the network in the event that merchants go bankrupt. With this principle in mind, the network is viable as long as 20% of merchants do not go bankrupt. On the other hand, another network security system was implemented by the project. Vow uses a burn mechanism, whereby 1.6% of the value of the Vow currency spent as a discount by customers is destroyed forever. This automatic burn makes it possible to maintain the balance between the tokens issued and the tokens accepted as a discount, taking into account a bankruptcy rate of merchants over the years.

When a new crypto project comes up, the first thing that many look at are the men and women behind it. In other words, does the project have the means to achieve its ambitions? In Vow’s case, the white paper presents a very strong team with decades of experience behind them. The project aims to be international from the get-go, and we can see that existing country specific operations are already in place. The more than 25-strong team is led by Bish Smeir, the founder and a director of the project.

He recently said to Cointribune:

“What good is all the crypto in the world if the local pub or restaurant won’t accept it? That is what Vow promises to solve for the entire crypto community.”

The project team also has a partnership with Aventus.io, which operates a layer-two scaling solution. The Vow project uses this to access ample support its projected transaction volume. Reward programmes on the network already have processed 8.5 million historical transactions to date on Aventus.

Furthermore, regulatory and compliance issues are essential in the world of blockchain technologies. Therefore, Vow has entered into a partnership with Elliptic and Jumio, companies at the forefront of all areas of on-chain analysis, in order to ensure the best possible level of compliance with regulations in place.

The Vow ecosystem has pulled out all the stops to make the project a global success and to launch a new form of decentralised currency. The partnerships already signed allow for nearly ten million network participants to be supported across several countries. These include the United Kingdom, Ireland, Denmark, Malta, Australia, New Zealand, India, South Africa, Zimbabwe and the USA. Of course, the goal is to very quickly cover the whole globe as the project develops. This list of countries represents those where Vow will be deployed within the ecosystems of companies that validate transactions for merchants. This allows Vow currency to be issued by local traders. The crypto landscape is, of course, changing rapidly across the globe. Local legal considerations, regulatory environments and even Covid lockdowns prevent some countries from implementing instant rollouts, however, because Vow can operate in the ecommerce world too, there is no end to its growth.

Vow: the global crypto project of the decade

To conclude, given the success so far, the track record of the team and the vision of reinventing a completely decentralised currency, Vow has all the makings of a project that can change the world and the way we buy and exchange goods and services in shops – whether physical or online. If Bitcoin was the project of the 2010s, Vow has everything needed to become the project of the 2020s. Vow is already listed on Uniswap and HitBTC, and continues to sell tokens directly, which are locked for six months on its token sale site. All of us at Cointribune are sure to closely follow how this project evolves, and in the meantime, you can head on over to Vow’s Twitter page to find out about any updates!