In this current climate of FUD news, sometimes it is nice to have some light-hearted news. So, please put your hands together to the West Midlands for bringing us this welcome break! British police searching for the green gold, ended up finding the digital gold, Bitcoin (BTC), last week. 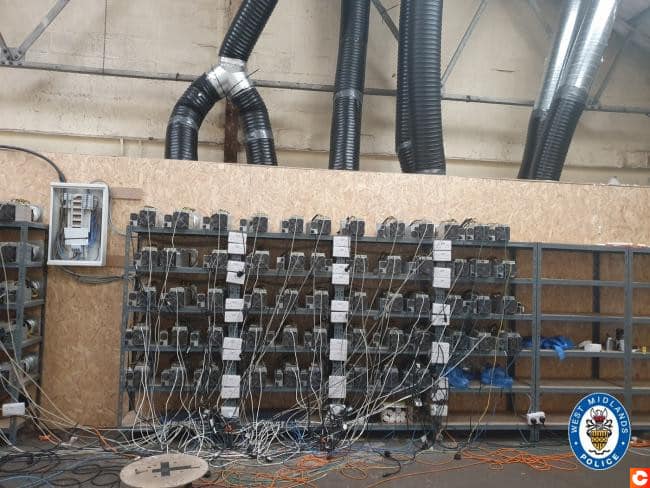 After a tip off, on 18th May 2021 West Midlands police raided an industrial estate 15 miles west of the UK’s second biggest city, Birmingham. Now usually, when unusually high amounts of electricity are being consumed by a property it’s often a tell-tell sign that Amsterdam’s finest is being cultivated to satisfy Britain’s monstrous appetite for cannabis.

However, low and behold as the rozzers smashed down the doors they were not greeted by wafts of the floral matter they were expecting. What they were met with though, was the sound of whirring fans and around 100 mining rigs!

According to the police, just like many of the illegal growers of the green gold, these Bitcoin miners were stealing electricity from the National Grid. While this may sound ingenious to some, it is a trick that many have used way before Bitcoin even existed. Of course, the irony here is that the blockchain could be integrated here to halt the hijacking of electricity!

Sgt Jennifer Griffin commented how there were many signs meaning that the police had thought they were going to find a cannabis farm. “It had all the hallmarks of a cannabis cultivation set-up and I believe it is only the second such crypto mine we have encountered in the West Midlands,” she said.

Since this is not West Midlands Police’s first rodeo they often fly helicopters, or even now drones, over areas where there are suspicious signs. They are equipped with heat detecting equipment which quickly tells where the ‘farms’ are! At the end of the raid the mining equipment was seized but no arrests were made.

What is Bitcoin mining?

Bitcoin mining is the process whereby new bitcoins are released into the system. Mining is an integral part of the whole Bitcoin ecosystem. Bitcoin mining has come under attack from mainstream media of late, but why not learn for yourself about all things Bitcoin and form your own opinion? The outcomes will surprise you.

I wonder how many of these illegal Bitcoin mining farms exist in the UK? Perhaps if they were risking so much they should have used the more powerful Antminer S19 Pro? Either way, at least we know that these miners will have been struggling after Nvidia’s change of tune on their chips… that being said, free electricity makes Bitcoin mining prettyy profitable!