Degen Sweepers: The NFT project that aims to become number 1

A new NFT collection is born, and the Urkann Army could not be happier. Its goal? To rally all the degens of Solana and well beyond. Let’s take a look at this colorful project. 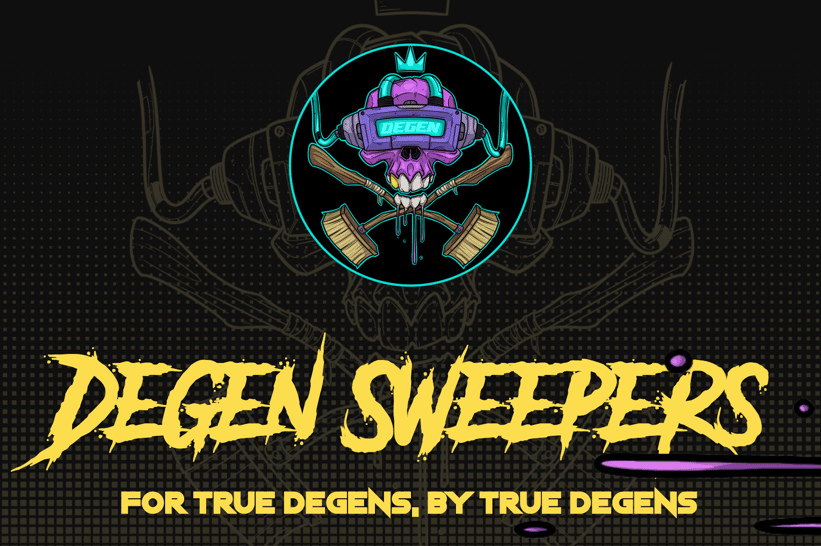 What is Degen Sweepers?

It is a collection of 10,000 NFTs with immutable metadata, developed by Urkann, an investor, successful businessman and co-founder of the NFT Factory in Paris. He is also a crypto influencer and supporter of the Solana ecosystem. In fact, it’s hard to talk about this project without alluding to its sponsor. The Degen Sweepers are entirely designed around Urkann’s branding. However, they were created by the contemporary artist Resist.

Urkann is one of the leading figures in the crypto sphere on Twitter, where he has thousands of followers. He is famous for his successful NFT investments, which he achieves by applying a sweeping strategy. This method consists of buying the “floor price” of a collection with high potential in large quantities and then “diamond hand” or “hodl” over a long period. Urkann has made a name for himself through projects such as Solana Monkey Business, SolGods, (The Fracture) Trippin Ape Tribe and Degods. Thanks to his performances, his nickname has been declined to “Urkanning“, an expression that has practically replaced the term “sweeping” in the jargon.

Degen Sweepers is an answer to the wish of his community, which he affectionately calls Urkann Army, to welcome an NFT collection he created. It is also an opportunity for his followers to gather around their shared passion for NFTs, but more importantly, to connect more with their mentor.

“With Degen Sweepers, my desire is to bring all degens in Solana and beyond (Ethereum) under one entity – the Urkann Army. And together, [we will] bring maximum value to our hodlers and the ecosystem across Degen City,” Urkann told us.

As a reminder, degen refers to a subculture of crypto traders driven only by the lure of gain and the desire to have fun. As for the Urkann Army, it aims to develop the whole NFT sphere on Solana. In addition, it also intends to create as much value as possible to meet the needs of the community. It should also be noted that this “army” is developing significantly and at a very steady pace. Urkann has partnered with the talented developer Ryuk who is also the CTO of Degen Sweeper, to achieve two common goals: to bring maximum value and to become the number 1 project across all blockchain.

Degen Sweepers, just an NFT collection and nothing more?

Degen Swepers is an ambitious project that is far from being limited to the aforementioned NFT collection. In fact, the scope of this initiative is much broader. It has three major components.

First of all, there is an NFT marketplace. There are already several on the market dedicated to collectibles trading, such as OpenSea or Magic Eden. Degen Sweepers’ proposal is to offer a complete platform designed to meet the specific needs of degens. Unique tools will soon be available to enhance the user experience. In addition, the marketplace will integrate a multi-chain custodial wallet to support payments from any network. The marketplace will also return a portion of the revenue to the users. This means that they will automatically receive a percentage of the purchases made by their affiliated users. But we don’t know more about it for now.

Then there is Degen City, the ecosystem that will be developed around the Degen Sweepers collection. People who own collectibles from this series will have access to a number of benefits within this virtual metropolis (exclusive areas, apartments for hodlers). But more broadly, it should be considered as a one-stop shop that will bring together everything related to NFTs from Solana and Ethereum. Degen City will be available in two versions. First, a regular web version. And second, a version built in the metaverse of The Sandbox. It will be established on a 24×24 plot of land owned by Urkann. It should be noted that properties of this size are highly prized in the market and this one in particular has already been the subject of buyout offers exceeding $10 million. The idea is to bring together all the degens in a single place of exchange and sharing, with full access to all the services of the community. This universe will include the NFT marketplace, movie theaters, stadiums, bars, casinos, homes and even shopping malls to collaborate with various brands and be able to bring the Degen City ecosystem to life.

Finally, the project intends to launch its own token, the $DEGEN, which is scheduled for release in late September. It will be at the core of exchanges within the ecosystem and will be transferable on both Solana and Ethereum networks. This token, in addition to the NFT collection, will be the backbone of the entire ecosystem and will offer benefits to all its hodlers. For example, they will be able to use them to participate in launchpads on the NFT marketplace that will be launched soon.

Launched only a few months ago, the NFT collection Degen Sweepers is already a great success with the community. From the artistic appeal of the items on offer to the macro-economic vision that drives the project, it has everything to charm. Moreover, the startup recently completed a seed funding round during which 1968 NFTs, out of the 10,000 in the collection, were sold for $200 each. These sales, which correspond to 20% of the overall offering, generated a total of 9879.37 SOL. Subsequently, 55% of the funds raised were converted into stablecoins to finance the development of Degen City. Now the team has to turn this idea into reality in order to bring more value to the Urkann Army. This being said, another round of financing is planned very soon…